Start a Wiki
watch 01:48
The Loop (Movies)
Do you like this video?
Percy Jackson: Sea of Monsters 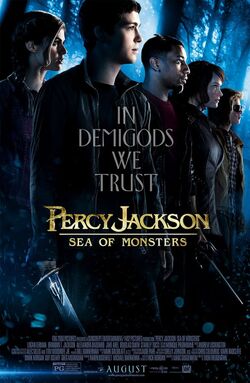 Percy Jackson: Sea of Monsters is a 2013 American fantasy-adventure film based on the Rick Riordan novel of the same name. It is a sequel to the 2010 film Percy Jackson & the Olympians: The Lightning Thief and continues the adventures of Percy Jackson (Logan Lerman) and his friends, as they search for the Golden Fleece at the titular Sea of Monsters to save an ailing magical tree that protects their home from foes. The film was produced by Karen Rosenfelt, Mark Radcliffe and Chris Columbus (who served as the director for the first film) under Fox 2000 and directed by Thor Freudenthal. Originally planned for a release in March 2013 the film was pushed to August of the same year. The film was released on August 7, 2013, and was converted to 3D in post-production. The film received mixed reviews from critics upon release and has grossed almost $153 million at the worldwide box office The film is yet to release in certain major commercial markets.

It stars Logan Lerman as the the titular hero and includes an ensemble cast of Brandon T. Jackson, Alexandra Daddario, Jake Abel, Leven Rambin, Douglas Smith, Nathan Fillion and Stanley Tucci. Filming began in late April 2012 and concluded in July of the same year with reshoots taking place in January 2013. It was shot in Vancouver and New Orleans.

The story begins with a young Annabeth, Luke, Grover and Thalia running to Camp Half-Blood while being pursued by monsters. Thalia sacrifices herself to get the others into the camp, and her father Zeus transforms her into a pine tree, creating a magical border around the camp so that no other half-blood would suffer from a fate as she did. The scene then shifts to Percy during a camp competition against Clarisse La Rue. Percy loses the competition after he assists another camper, and is badgered by Clarisse. Soon after, Chiron and Mr. D investigate a Cyclops that has somehow passed through the border, and the cyclops is revealed to be Tyson, Percy's half-brother. After the campers pick on Percy and Tyson, the camp is suddenly attacked by a Colchis Bull, who breaks through the border and ravages Camp Half-Blood. Percy finally defeats it with the help of Tyson, Annabeth, and Clarisse, and Luke Castellan suddenly appears and confronts Percy, trying to convert the son of Poseidon to his cause. When Percy refuses, Luke disappears.

The campers soon realize that Thalia's tree has been poisoned and that they have been left vulnerable to attacks. Percy asks Chiron about a prophecy he is involved in (for Luke had tried to bait him with the knowledge earlier), and subsequently visits the Oracle, who tells him of a prophecy of Percy either saving or destroying Olympus. Annabeth then proposes a quest to Mr. D, where they retrieve the Golden Fleece from Polyphemus in the Sea of Monsters and use it to heal Thalia's tree. Mr. D then announces the quest, but chooses Clarisse to lead the quest instead, much to Annabeth's and Percy's dismay. Percy then convinces Grover and Annabeth to accompany him on the quest, and Tyson joins them against the groups' wishes. Annabeth hails the Taxi of Damnation, and Percy threatens the three drivers to tell him of his prophecy, and they give him a set of coordinates in the Sea of Monsters before ejecting the group from the cab in Washington D.C. While walking down the street, Grover is kidnapped by Chris Rodriguez and taken to Luke. Meanwhile, Percy, Annabeth, and Tyson meet with Hermes and he gives them a thermos that releases the winds from the four corners of the earth, and a magical box sealer that, when taped around as a border, can make anything disappear. The three ride a Hippocampus to Luke's yacht, The Princess Andromeda, where they are captured and locked in the brig. Percy frees them with the box sealer and they escape after fighting through Luke's men and a Manticore, using the thermos to escape on the ship.

The group is consumed by Charybdis after Tyson loses the thermos, and they discover Clarisse in the monster's stomach. Percy and Clarisse work together to escape Charybdis's gut, and they arrive at CirceLand, Polyphemus's lair. Percy finds Grover and the five escape Polyphemus, retrieving the fleece and trapping him in his cave. Afterwards, Luke arrives and demands the fleece from Percy, who refuses. Luke shoots a crossbow at Percy, but Tyson takes the bolt in the chest before falling to the water below, much to Percy's shock.

Luke begins reviving Kronos as Percy laments over the loss of Tyson. The team then escapes captivity and a fight ensues. Percy grapples with Luke over the Fleece, but Luke easily gains the upper hand. Luke is suddenly thrown away by Tyson, who is revealed to have survived his wound, due to the water healing it, as he is Poseidon's son. The group however watches in horror as Kronos rises from the sarcophagus. Kronos consumes Luke and Grover, before battling Percy. Percy realizes that Riptide is the "cursed blade" of the prophecy, and slays Kronos with it, Kronos regurgitates Grover and Luke, the latter landing in Polyphemus' Lair. Their victory is short lived as Annabeth is stabbed in the back by the Manticore, who is killed in turn by Clarisse and Grover. Annabeth dies in Percy's arms, but is resurrected by the Fleece. Percy then gives the fleece to Clarisse and they return to Camp Half-Blood. Clarisse places the fleece on Thalia's tree. The group returns later to find Thalia alive, as the fleece "did its job too well" and returned her to human form. Percy realizes that Thalia is a child of Zeus, and therefore is another possible child of the prophecy about either preserving or destroying Olympus. The movie ends by showing the sarcophagus with Kronos's remains in it glowing, implying that Kronos still has some degree of his power and is still planning to return.

In April 2013, it was reported by the 20th Century Fox that the third film of the Percy Jackson series will be filmed and released in December 2015 [citation needed]. It is currently unknown who the director will be or if Thor Freudenthal is willing to direct the third film. Paloma Kwiatkowski, the actress of Thalia Grace, stated that she signed on for any future films in the franchise. Logan Lerman, Alexandra Daddario, Brandon T. Jackson, and Jake Abel also signed on for three films, back when production for Percy Jackson and the Olympians: The Lightning Thief was ongoing. Robert Maillet is interested in returning as well. Two petitions exist with regards to support towards the remaining films being made[1] [2] while a You Tube video released by the organizer of the petition encourages fans to buy the movie on Blu ray when it comes out on December 17 (North America), and December 14(France)/whenever it is released in the fans' country to help support towards the reaming movies in the series to be made.[3]


Cite error: <ref> tags exist, but no <references/> tag was found
Retrieved from "https://movies.fandom.com/wiki/Percy_Jackson:_Sea_of_Monsters?oldid=245884"
Community content is available under CC-BY-SA unless otherwise noted.