watch 00:59
The Loop (Movies)
Do you like this video?
Pet Sematary 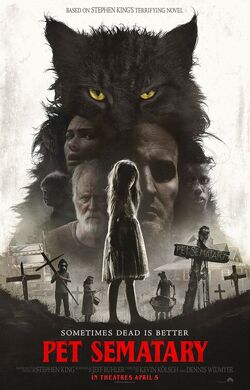 Pet Sematary is a 2019 American supernatural horror film directed by Kevin Kölsch and Dennis Widmyer. The cast of the film consists of Jason Clarke, Amy Seimetz, and John Lithgow.

Louis Creed, a doctor from Boston, Massachusetts moves to the small town of Ludlow, Maine with his wife Rachel, their two young children, Ellie and Gage, and Ellie's cat, Church. Exploring the woods, Ellie stumbles across a funeral procession of children taking a deceased dog to a cemetery called Pet Sematary. Jud Crandall, their neighbor, warns them that the woods are dangerous.

At the university hospital, Louis is left shaken after failing to save the life of Victor Pascow, a student who was fatally injured after being struck by a vehicle. He later experiences a vivid dream in which Victor Pascow leads him to the back of the cemetery and warns him not to "venture beyond." Louis awakens to find his feet and bed sheets caked in mud, suggesting that the events were more than just a nightmare.

On Halloween, Church is killed by a truck. Jud takes Louis to the Pet Sematary, then farther to an ancient burial ground to bury Church. The next day, Louis is stunned when Church returns home alive, although he is more aggressive, violently ripping open a bird. Jud tells Louis that the burial ground brings things back from the dead and is believed to be inhabited by a spirit known as the Wendigo. After Church attacks Gage, Louis attempts to euthanize him. However, he decides against killing the cat and instead sets him free.

During her birthday party, Ellie spots Church on the road and rushes to him, but she is killed in an accident with a large tanker truck. The family is devastated by her death, and Rachel and Gage leave to spend a few days with Rachel's parents. Jud, sensing that Louis is planning on resurrecting Ellie, warns the grieving father that "sometimes dead is better". Despite warnings from him and Pascow's spirit, Louis's grief and guilt spur him to carry out his plan. He drugs Jud, exhumes Ellie's body, and buries her in the burial ground of the Pet Sematary as the Wendigo watches. Ellie comes back from the dead but manifests a disturbing demeanor. At her parents' house, Rachel is frightened by visions of her dead sister Zelda, who suffered from spinal meningitis and died after falling down a dumbwaiter shaft. Gage also sees the ghost of Victor Pascow. Jud wakes up and confronts Louis. He spots Ellie and flees to his house in horror, retrieving a pistol to kill her. However, as he is distracted by a growling Church, Ellie slices through Jud's Achilles tendon with a scalpel. She briefly takes the form of Jud's dead wife, Norma, suggesting Norma and Ellie are suffering and burning in a damned afterlife, before stabbing Jud to death, while Church looks on.

Rachel and Gage return home and meet the undead Ellie. Rachel is horrified and Louis tells her about the burial ground and its purpose. Rachel is stabbed by Ellie but manages to escape to the bathroom with Gage. Louis finds Jud's body and is able to save Gage as Ellie fatally stabs Rachel. He locks Gage in the car and hurries to Rachel, who begs him not to bury her in the Pet Sematary. Ellie knocks Louis unconscious and drags Rachel's body to the burial ground. Louis runs for the Pet Sematary. Ellie ambushes him and they engage in a frenzied fight. As Louis prepares to decapitate Ellie with a shovel, he is impaled with a weather vane by a reanimated Rachel, and he too is buried. Along with Church, the trio sets fire to Jud's house before approaching the car where Gage sits inside. The resurrected Louis gestures to Gage to unlock the door.

Louis spares Ellie instead of killing her, and they both bury Rachel, to her horror, behind the Pet Sematary, promising that they will be a family together forever. After burning Jud's house, Louis and Ellie approach the family car, where Gage is still locked up. He gestures to Gage to open the car, which Gage does. In the house, Ellie, Church and a newly resurrected Rachel approach and reunite with Louis holding Gage, who is crying in fear.

Retrieved from "https://movies.fandom.com/wiki/Pet_Sematary_(2019)?oldid=189415"
Community content is available under CC-BY-SA unless otherwise noted.