Start a Wiki
watch 01:38
The Loop (Movies)
Do you like this video?
Peter Pan 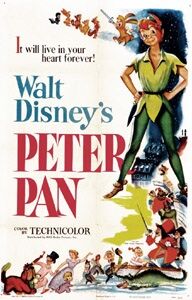 As the narrator tells the viewing audience, the action about to take place "has happened before, and will all happen again", only now it will happen in Edwardian London, in the neighborhood of Bloomsbury, where George and Mary Darling's preparations to attend a party are disrupted by the antics of the boys, John and Michael, acting out a story about Peter Pan and the pirates, which was told to them by their older sister, Wendy. Their father, who is fed up with the stories that have made his children less practical, angrily declares that Wendy has gotten too old to continue staying in the nursery with them, and it's time for her to grow up and have a room of her own. That night, they are visited in the nursery by Peter Pan himself, who teaches them to fly with the help of his pixie friend, Tinker Bell, and takes them with him to the island of Never Land.

A ship of pirates is anchored off Never Land, commanded by Captain Hook with his sidekick, Mr. Smee. Hook boldly plots to take revenge upon Peter Pan for cutting off his hand, but he trembles when the crocodile that ate it arrives; it now stalks him, hoping to taste more. Hook also forms a plan to find Peter's hideout using the knowledge of Tiger Lily. The crew's restlessness is interrupted by the arrival of Peter and the Darlings. The children easily evade them, and, despite a trick by jealous Tinker Bell to have Wendy killed, they meet up with the Lost Boys: six lads in animal-costume pajamas, who look to Peter as their leader. Tinker Bell's treachery is soon found out, and Peter banishes her "forever" (though she is eventually forgiven). John and Michael set off with the Lost Boys to find the island's Indians, who instead capture them, believing them to be the ones responsible for taking the chief's daughter, Tiger Lily. Big Chief, the Indian chieftain and Tiger Lily's father, warns them that if Tiger Lily is not back by sunset, the Lost Boys (along with John and Michael) will be burned at the stake.

Meanwhile, Peter takes Wendy to see the mermaids. Wendy is considering leaving when the mermaids try to drown her, but things change when the mermaids flee in terror at the sight of Hook. Peter and Wendy (who quickly spy on Hook) see that he and Smee have captured Tiger Lily, so that they might coerce her into revealing Peter's hideout. Peter and Wendy free her, and Peter is honored by the tribe. Hook then plots to take advantage of Tinker Bell's jealousy of Wendy, tricking her into revealing the location of Peter's lair. However, his plan to kill Peter becomes a bit compromised when Tinker Bell makes him promise to "not put a hand or hook on Peter". He agrees, and then locks Tinker Bell in a lantern as a makeshift jail cell. Wendy and her brothers eventually grow homesick and plan to return home. They invite Peter and the Lost Boys to return to London and be adopted by the Darling parents. The Lost Boys agree, but Peter is so set against growing up that he refuses, presumptuously assuming that all of them will return shortly. The pirates lie in wait and capture the Lost Boys and the Darlings as they exit, leaving behind a time bomb to kill Peter. Tinker Bell learns of the plot just in time to snatch the bomb from Peter as it explodes.

Peter rescues Tinker Bell from the rubble and together they confront the pirates, releasing the children before they can be forced to walk the plank. Peter engages Hook in single combat as the children fight off the crew, and finally succeeds in humiliating the captain. Hook and his crew flee, with the crocodile in hot pursuit. Peter gallantly commandeers the deserted ship, and with the aid of Tinker Bell's pixie dust, flies it to London with the children aboard. However, the Lost Boys decide to return to Never Land rather than be adopted in London.

Mr. and Mrs. Darling return home from the party to find Wendy not in her bed, but sleeping at the open window; John and Michael are asleep in their beds. The parents have no idea that the children have even been anywhere. Wendy wakes and excitedly tells about their adventures. The parents look out the window and see what appears to be a pirate ship in the clouds. Mr. Darling, who has softened his position about Wendy staying in the nursery, recognizes it from his own childhood, as it breaks up into clouds itself.

The film's story is based on the play and novel Peter Pan by J. M. Barrie. Disney had been trying to buy the rights to the play since 1970. He finally received them four years later, after he arranged with in London (to whom Barrie had bequeathed the rights to the play). His studio started the story development and character designs in the early-1950s, and intended Peter Pan as a follow-up to Bambi, but The Wizard Of Oz forced the project to be put on hold. Just like Fun and Fancy Free before it, the original pre-war character designs for Peter Pan were very different from the final product. The original version actually had Nana go to Neverland with Pan and the Darling children. Also, the original version was a little darker. It was not until after the war that actual production of the film commenced.

Until this movie, the role of Peter Pan had always been played by a young woman. Instead, Walt Disney chose to portray him as a 12-year-old boy. Disney explained the age by saying, "He is 12 years old forever simply because he refuses to grow up beyond that comfortable age." There are numerous other differences, including the revision of Tinker Bell's "death" (whereas in the original play she gets knocked out by a poison, in the animated film she gets knocked out by a bomb), which can be attributed to Disney's history of artistic license and reshaping of content to be more suitable for younger audiences. The animated film not only marked the first time in which Pan was played by a male, it was also the first time in which Tinker Bell, Nana and the Crocodile (named Tick-Tock the Croc in comics published later on) were all shown as believably as Barrie had originally intended (on stage, Tinker Bell was shown as not much more than a mere spot of light, Nana was played by an actor, and the Crocodile was represented by offstage ticking; here, Tinker Bell was represented as an actual sprite, Nana was a real dog, and the Crocodile was a real crocodile who had ingested an alarm clock).

Tinker Bell (who wears a slim, green dress, slippers, and yellow panties) owes her shapely form to the of the war. Margaret Kerry was Tinker Bell's live-action reference model, contrary to rumors that it was Marilyn Monroe. Margaret Kerry posed on a soundstage, while animator Marc Davis drew Tinker Bell. Kerry was also the voice of the red-haired mermaid in the film.

Kathryn Beaumont, the voice for Wendy, also performed the live action references. In an interview, she said she had to hold out her arms and pretend to fly for all the scenes requiring it.

One of the few stage traditions that Disney did retain for the animated film was to have Captain Hook and George Darling be played by the same actor. In this case, Sterling Holloway voiced both characters, he was the live-action reference for them as well. Also, in the original play, Hook lost his right hand, but the Disney artists felt that would limit his actions too much, and so relocated the hook to his left hand.

The songs in Peter Pan were composed by Oliver Wallace, who composed the incidental music score.

In 1990, when Disney announced that it would release Peter Pan on video, it had a promotional tie in with RJR Nabisco.[1]

Peter Pan was first released on VHS in 1990. A THX 45th anniversary limited edition of the film was then released on March 3, 1998 as part of the Walt Disney Masterpiece Collection. The first DVD release of Peter Pan was November 23, 1999 as a Walt Disney Limited Issue. Peter Pan had its first release on a special edition DVD in 2002 to promote the sequel, Return to Neverland. In 2007, Disney released a 2-disc Platinum Edition DVD of the film. A Blu-ray Diamond Edition of film was released on February 5, 2001 to celebrate the movie's 60th Anniversary.[3][4]

Retrieved from "https://movies.fandom.com/wiki/Peter_Pan_(1953)?oldid=181225"
Community content is available under CC-BY-SA unless otherwise noted.