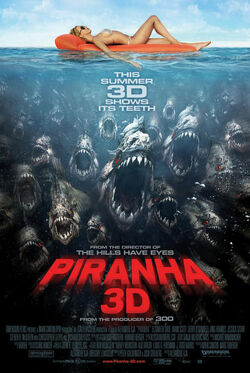 Fisherman Matt Boyd (Richard Dreyfuss) is fishing in Lake Victoria when a small earthquake hits, splitting the lake floor and causing a whirlpool. Boyd falls in, and is ripped apart by a shoal of piranhas that emerge from the chasm.

Jake Forester (Steven R. McQueen) is admiring attractive tourists as spring break begins. He reunites with his old crush Kelly Driscoll (Jessica Szhor) and meets Derrick Jones (Jerry O'Connell), a sleazy pornographer, as well as Danni Arslow (Kelly Brook) one of his actresses. Derrick convinces Jake to show him good spots on the lake for filming a pornographic movie. That night, Jake's mother, Sheriff Julie Forester (Elisabeth Shue), searches for the missing Matt Boyd with Deputy Fallon (Ving Rhames). They find his mutilated body and contemplate closing the lake. This decision, however, is made difficult as two-thousand partying college students are on spring break, which is important for bringing revenue to the small town. The next morning, a lone cliff diver is attacked and consumed by the vicious, marauding piranhas.

Jake bribes his sister, Laura (Brooklynn Proulx), and brother, Zane (Sage Ryan) to stay home alone so that he can show Derrick around the lake. After Jake leaves, Zane convinces Laura to go fishing on a small sandbar island. They forget to tie the boat down and are stranded in the middle of the lake. Meanwhile, Jake goes to meet with Derrick and runs into Kelly, who accepted Derrick's invitation on board his boat, The Barracuda. Jake meets Crystal Shepard (Riley Steele), another one of Derrick's actresses, and cameraman Andrew Cunningham (Paul Scheer).

Julie takes a team of seismologist divers—Novak Radzinsky (Adam Scott), Sam Montez (Ricardo Chaviro), and Paula Montellano (Dina Meyer) to the fissure. Novak speculates that the rift leads to a buried prehistoric lake. Paula and Sam scuba dive to the bottom and discover a large cavern filled with large piranha egg stocks. Both are killed by the piranhas before they can alert the others to the discovery. Novak and Julie find Paula's corpse and pull it onto the boat, capturing a lone piranha, which they take to Carl Goodman (Christopher Lloyd), a retired marine biologist who runs a pet store and aquarium shop. He explains that it is a highly aggressive prehistoric species, long believed to be extinct, and that the piranhas have survived through cannibalism. The species is able to vigorously devour its prey in seconds.

Julie, Novak, Fallon, and Deputy Taylor Roberts try to evacuate the lake, but their warnings are ignored, until the piranhas begin to fiercely attack the tourists. Novak boards a jet-ski with a shotgun to help while Fallon drags people to shore, and Julie and Taylor try to get swimmers into the police boat. Almost everyone in the lake is either wounded, dismembered, or killed by the piranhas altogether, while the remaining surviving tourists escape. The party spot rapidly turns into a bloodbath.

Meanwhile, Jake spots Laura and Zane on the island and forces Derrick to rescue them. Derrick crashes the boat into some rocks, flooding the boat's lower deck and causing the boat to begin sinking. Kelly is trapped in the kitchen while Derrick, Crystal and Andrew fall overboard from the impact of the collision. Crystal is devoured, and Andrew escapes to shore unharmed. Meanwhile, Danni manages to get a partially eaten Derrick back on board, where he then dies.

Deputy Fallon makes a last stand, taking a boat motor and using its propeller to shred many piranhas, though he is presumed to be killed by the piranhas. After the chaos settles, Julie receives a call from Jake pleading for help. Julie and Novak steal a speedboat and head off towards the kids. They reach Jake and attach a rope to his boat. Julie, Danni, Laura, and Zane start crossing the rope, but the piranhas latch onto Danni's hair, causing her to lose her grip on the rope and fall into the water, where she is quickly devoured. The others make it across safely, but the rope comes loose. Using Derrick's corpse as a distraction, Jake ties the line to himself and goes to save Kelly. He ties Kelly to him and lights a flare after releasing the gas from a pair of stored propane tanks. Novak starts the boat and speeds away just as the piranhas surround Kelly and Jake. They are dragged to safety as the propane tanks explode, destroying the boat and killing most of the piranhas.

Mr. Goodman calls Julie on the radio, and Julie tells him that they seem to have killed the majority of the piranhas. A horrified Goodman tells her that the reproductive glands on the piranha they obtained were not mature, which means that the fish they have killed were only the babies. As Novak wonders aloud where the parents are, the human sized-piranha queen leaps out of the water and eats him.

Retrieved from "https://movies.fandom.com/wiki/Piranha_3D?oldid=151500"
Community content is available under CC-BY-SA unless otherwise noted.