Start a Wiki
watch 01:27
The Loop (Movies)
Do you like this video?
Pirates of the Caribbean: On Stranger Tides 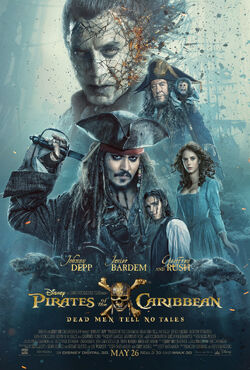 Pirates of the Caribbean: Dead Men Tell No Tales (released in some countries as Pirates of the Caribbean: Salazar's Revenge) is a 2017 American swashbuckler fantasy film, the fifth installment in the Pirates of the Caribbean film series and the sequel to On Stranger Tides (2011). The film is directed by Joachim Rønning and Espen Sandberg from a script by Jeff Nathanson, with Jerry Bruckheimer serving again as producer. Johnny Depp, Kevin McNally and Geoffrey Rush reprise their roles as Jack Sparrow, Joshamee Gibbs and Hector Barbossa, respectively, and are joined in the cast by Javier Bardem, Brenton Thwaites and Kaya Scodelario. In the film, Captain Jack Sparrow searches for the Trident of Poseidon while being pursued by an undead sea captain and his crew.

The filmmakers cited the series' first installment, The Curse of the Black Pearl (2003), as inspiration for the script and tone of the film. Pre-production for the film started shortly before On Stranger Tides was released in early 2011, with Terry Rossio writing the initial script. In early 2013, Jeff Nathanson was hired to write a new script for the film, with Depp being involved in Nathanson's writing process. Initially planned for a 2015 release, the film was delayed to 2016 and then to 2017, after 6 years of development hell, due to script and budget issues. Principal photography started in Australia in February 2015, after the Australian government offered Disney $20 million in tax incentives, and ended in July 2015.

Dead Men Tell No Tales was released in the United States in conventional, 3D and IMAX formats on May 26, 2017. The film received generally mixed reviews, with critics praising its visual effects, musical score, performances of the cast, and the film’s sense of fun, but criticizing its formulaic plot, screenplay, narrative and direction. It grossed $794 million worldwide against a production budget between $230–320 million, making it one of the highest-grossing films of 2017 but the lowest total of the series since The Curse of the Black Pearl.

Retrieved from "https://movies.fandom.com/wiki/Pirates_of_the_Caribbean:_Dead_Men_Tell_No_Tales?oldid=225454"
Community content is available under CC-BY-SA unless otherwise noted.