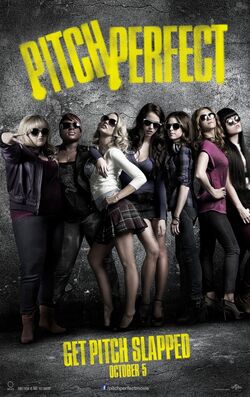 During the 2011 ICCA Finals at Lincoln Center, Barden University’s all-female a cappella group, the Barden Bellas, lose to their all-male rival group the Barden University Treblemakers, due to junior member Aubrey Posen's vomiting on stage in the middle of her solo. Four months later, newly arrived Barden University freshman Beca Mitchell has no desire to attend college but is forced to do so by her father, a professor at the university, with whom Beca has a strained relationship. Wishing she could instead pursue a career as a music producer in Los Angeles, Beca spends her time making mash-up mixes of songs and takes up an internship at the school radio station, where she gets to know fellow freshman Jesse Swanson.

At the university’s activities fair, Beca is offered to join the Bellas by seniors and current co-leaders Aubrey and Chloe Beale, but she declines. Later, Chloe discovers Beca’s talent for singing and convinces her to audition. Beca reluctantly auditions by performing "Cups (When I'm Gone)", which impresses Chloe, and joins the Bellas (despite Aubrey's blatant disapproval) with Cynthia Rose Adams, Stacie Conrad, Lilly Onakuramara, and Patricia "Fat Amy" Hobart. Meanwhile, Jesse is also revealed to have joined the Treblemakers.

The Bellas participate in the 2012 ICCA Regionals where, at Aubrey's insistence, they perform the same medley that helped the Bellas advance to the Finals the previous year. In spite of their stale set list, the group manages to place second, sending them to the Semi-Finals. After the competition, the Bellas try to break up a fight between the Treblemakers and the Tonehangers, a male a cappella long past their student years. Beca and Fat Amy accidentally smash a window with the Treblemakers' trophy, which alerts a police officer who then arrests Beca. Outside the police station, Beca meets Jesse but discovers that he has gotten her father involved in the situation, causing a rift between her and her father and causing Beca to berate Jesse.

Beca tries to propose that the Bellas be more daring, but Aubrey insists that they will win with their traditional repertoire. At the ICCA Semi-Finals, Beca inserts an impromptu layering of "Bulletproof" while the others perform "The Sign", hoping to reinvigorate the crowd after they seemed to have lost interest. After the performance, Aubrey confronts Beca for her improvisation, and accuses her of hooking up with Treblemaker Jesse, a rule breach punishable by ejection from the Bellas. Jesse attempts to clarify for Beca but, frustrated at Aubrey's obliviousness and Jesse's convenience, Beca snaps at them both and quits the Bellas.

The Bellas do not advance to the Finals due to their third place ranking behind the Treblemakers and the Footnotes. Meanwhile, Jesse’s roommate Benji Applebaum finds out that Footnotes leader Timothy is a high school student and reports it, causing their disqualification and simultaneously advancing the Bellas to the Finals by default.

After spring break, Beca tries to apologize to Jesse for being rude, but he declines, telling that she pushes away everyone who cares about her. During the Bellas rehearsal, Chloe stands up against Aubrey's stubbornness, sparking a fight over the group's pitch pipe. However, Beca returns, apologizes to the Bellas for changing the set without Aubrey's permission during the Semi-Finals, and asks to be given a second chance. After all of the Bellas have a heart-to-heart conversation, Beca rejoins the group, and Aubrey relinquishes her half of the leadership to Beca.

Meanwhile, Treblemakers leader Bumper Allen leaves the group after being offered a job as a back-up singer for John Mayer. With Bumper gone, Jesse persuades the Trebles to let Benji join the group in Bumper's place, a position Benji failed to earn during earlier auditions.

At the Finals, the Bellas perform a modern piece arranged by Beca, which includes "Don't You (Forget About Me)", a song featured in The Breakfast Club, one of Jesse's favorite movies. This acts as a more effective apology, and after the performance, she and Jesse kiss. The Bellas defeat the Treblemakers and win the national championship. Six months later, auditions for new members take place.

As of 13 December 2011, singer and co-star Ester Dean tweeted "Last Day on Set of "Pitch perfect" its a Wrapped what a great time!", indicating that filming of the movie has ended. However, co-star Skylar Astin tweeted on 16 December 2011, that filming of this movie has officially ended, with a rainy day. The setting of the film will be in a campus and a university in Philadelphia, Pennsylvania. Elizabeth Banks was a co-producer and a co-star in the film.[1] 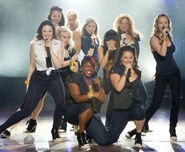 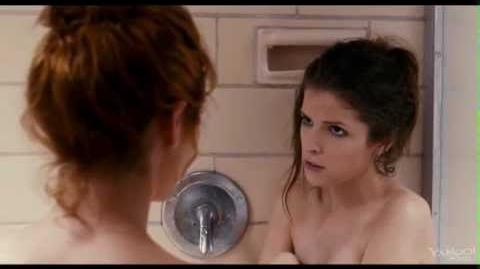 Retrieved from "https://movies.fandom.com/wiki/Pitch_Perfect?oldid=175525"
Community content is available under CC-BY-SA unless otherwise noted.