Start a Wiki
watch 01:27
The Loop (Movies)
Do you like this video?
Pitch Perfect 2 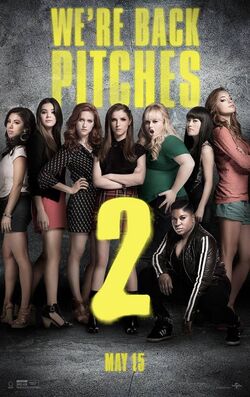 Three years after winning the previous competition, the Barden Bellas are now led by senior Beca Mitchell and three-time super senior Chloe Beale. The Bellas have become ICCA champions each of these three years. However, the group becomes involved in a national scandal (dubbed "Muffgate") when Patricia "Fat Amy" Hobart accidentally rips her pants in front of U.S. President Barack Obama during a performance on his birthday at the Kennedy Center, showing her genitalia to the public as she did not wear underwear. This scandal leads to the Bellas' suspension from the ICCAs. Beca makes a deal to allow the Bellas to be reinstated, should they win the World Championship of a cappella.

Freshman Emily Junk begins her college career, hoping to follow in the footsteps of her mother Katherine (Kayleigh Lewinton) by being a Bella. Katherine tells Emily she is more than junk and that she is in fact Pitch Perfect. At orientation, she watches an a cappella performance by the Treblemakers, now led by Beca's boyfriend Jesse Swanson. Benjamin "Benji" Applebaum, Jesse's best friend, overhears Emily, leading to a crush on her.

The Bellas learn that Das Sound Machine (DSM), a German powerhouse group, have replaced the Bellas on their victory tour. Additionally, Beca has started an internship at a recording studio, Residual Heat, something only Jesse knows.

Emily goes to the Bellas' sorority house to audition for them because of their absence from the auditions. When she sings her unfinished song "Flashlight," she succeeds in joining the Bellas.

At a car show where the ICCA winners are due to perform, the Bellas scout their replacements, DSM, led by intimidating duo Pieter Krämer and Kommissar, who take delight in mocking the all-girl group. Later, the Bellas are invited to an exclusive riff-off against DSM. Also in attendance are the Treblemakers and the Tone Hangers (a group of former Treblemakers, including former Treblemakers leader Bumper Allen, whom Fat Amy is now dating), as well as a group calling themselves the Green Bay Packers. The Bellas make it to the final two, but end up losing to DSM in the final showdown after a nervous Emily screws up an attempt to sing "Flashlight," due to it being an original song not from the right category ("90's Hip-Hop Jamz").

The next day at the warmups, the Bellas' chances of winning end in disaster when the performance sets Cynthia Rose Adams's hair on fire by pyrotechnics. Even before then, John and Gail question the Bellas' identity. In order to regain harmony and sync, Chloe takes them to a retreat led by former leader Aubrey Posen. Beca starts a heated debate with Chloe over herself being the only one thinking about life beyond the Bellas and Chloe's obsession with winning Worlds.

To prove to her boss that she can produce music well, Beca offers Emily to produce "Flashlight" at the studio. The group realizes that they will no longer be together and may go their separate ways after graduation, and regain harmony by singing "Cups (When I'm Gone)" (the very song that got Beca into the Bellas in the first movie). Amy remembers that she broke up with Bumper, and the next day, she goes to apologize to Bumper by standing on a canoe and paddling across the lake to him while singing "We Belong." Hurt, Bumper unsuccessfully tries to turn Amy away initially, but as the song progresses, he forgives her, and they reconcile. At the studio, Emily and Beca present their song to Beca's boss, in which he demonstrates envy for their talent and looks forward to producing with them.

The senior Bellas graduate and they all head off to Copenhagen for the World Finals, with Jesse and Benji to cheer them on. They perform a harmonized version of "Flashlight" with Aubrey, Katherine, and other past Bellas joining in. The Bellas win the championship and repair their damaged legacy. As the senior Bellas leave Barden, they give Emily a belated proper initiation with Fat Amy showing her how to do the last tradition: christening the house by sliding down the staircase.

In a mid-credits scene, Bumper performs on The Voice, chooses Christina Aguilera as his coach and makes her uncomfortable when he gives her an oddly lengthy hug.

Producer Paul Brooks and director Jason Moore told Variety that since the reception to the film was good, a sequel could potentially happen next year. In December 2012, Skylar Astin revealed that he and Rebel Wilson had meetings with Universal Studios about the potential sequel.

In June 2013, Wilson hinted in an interview that the sequel may be set in London.

According to IMDb, the plot will follow Fat Amy and Beca through their senior year at Barden University.