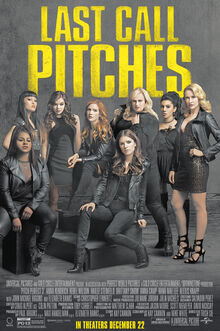 The film was released in the United States on December 22, 2017 by Universal Pictures.

Three years after their final competition, the Bellas have graduated from Barden College, but all hate their jobs. Beca, Fat Amy, Chloe, Aubrey, Lilly, Stacie, Cynthia Rose, Florencia, Jessica, and Ashley are thrilled when Emily, now a senior and leader of the current Barden Bellas, asks them to sing at an event. Arriving at the reunion, they learn that Emily simply invited them to see the new Bellas.

They later gather at a bar in disappointment, but express how much they miss each other. Aubrey convinces them to join a USO tour, near her Army officer father. Emily fills in for Stacie, who is eight months pregnant. The Bellas land at a base in Spain, greeted by their liaisons, soldiers Chicago and Zeke. They also meet the other three bands, including the mean-spirited female quartet Evermoist. The others use musical instruments, helping them defeat the Bellas in a riff-off.

Chloe begins to fall for Chicago. Fat Amy learns that Fergus, her estranged father and ruthless international crime lord, is staying in their hotel. The Bellas are invited to a party at DJ Khaled's suite, where Fat Amy is invited to a poker tournament. The tournament was a set up by Fergus, who begs to be in Amy’s life, which she agrees to after seeing he has changed. Beca develops a friendship with DJ Khaled's music producer Theo, who is impressed when she easily produces a mix of her own singing on Khaled's editing equipment. Moments later, the party is thrown into chaos when Aubrey accidentally ignites a fire.

While the Bellas are wallowing in disgrace, Stacie calls with news that her daughter, Bella, has been born, reinvigorating the Bellas. Back on the tour, the Bellas perform to adoring crowds. Fergus and Amy are connecting, until he accidentally reveals that he is only trying to acquire a US$180 million offshore account created by Amy's mother. Meanwhile, DJ Khaled asks Beca to open for him, without the other Bellas. Beca politely declines the offer and leaves to her room.

The Bellas are abducted and taken to a Fergus’ yacht, as an attempt to manipulate Amy. When Amy and Beca learn of the kidnapping, Beca distracts Fergus by leading the Bellas in a performance, allowing Amy to set a bomb. The Bellas escape the yacht, and Fergus survives the explosion, and is later arrested.

After the Bellas are rescued by the military, Fat Amy reveals DJ Khaled's proposition to Beca to the others. They encourage her to take the chance, agreeing that it is time to move on with their lives. They know they will stay connected to each other as a family. At the USO's final performance, Beca opens for DJ Khaled, then brings the Bellas onstage to sing their final performance – "Freedom! '90".

Gail and John, the public announcers when the Bellas' originally competed, have filmed a Bella documentary, only to be appalled when John realizes they didn't record the Bellas' final performance. The Bellas lives are improving: Amy uses her new bankroll for tributes to singers named Amy; Aubrey works as a birthing coach; Flo's juice cart becomes an international brand; Chloe gets into vet school; Cynthia-Rose enlists into USAF flight school; Emily returns to Barden and to her songwriting; Lilly reveals that she was quiet because she was possessed by Satan, the bomb snapped her out of it, and her real name is Esther, and starts a relationship with DJ Dragon Nutz; Aubrey reconnects with her father; Chloe and Chicago become an item; and Beca is now Theo’s boss.

Retrieved from "https://movies.fandom.com/wiki/Pitch_Perfect_3?oldid=175588"
Community content is available under CC-BY-SA unless otherwise noted.