Dusty Crophopper (Dane Cook) is a cropduster plane who works at a cornfield and practices aerobatic manuveurs in his spare time, dreaming of becoming a racer. His dreams are scorned by his boss, Leadbottom (Cedric the Entertainer) and his forklift/mechanic friend, Dottie (Teri Hatcher). However, he is supported by his fuel truck friend, Chug (Brad Garrett). Dusty and Chug train for qualifiers for the upcoming Wings Across the World race. On the night before the qualifiers, Dusty asks an elderly and reclusive navy war plane named Skipper Riley (Stacy Keach) to teach him how to fly well but Skipper refuses. Dusty enters the qualifiers, and although the audience mocks him for being a crop duster, he manages to wow them by his well-practiced flight maneuvers, but comes in 6th place and is the back-up qualifier. A few days latter, a representative from the qualifier visits his town looking for Dusty and announces to him that he now placed 5th. He barely makes it into the race due to the qualifier ahead of Dusty used a fuel enhancement ultimately getting disqualified from the race..

Later in the morning, Skipper visits Dusty and tries to talk him out of racing, but when Dusty explains he wants to prove he's more than just a crop duster, Skipper decides to mentor Dusty on his speed and agility. While in the midst of his training, Dusty admits that he has a fear of heights. Despite this, their training continues and when it is complete, Dusty heads off to the meeting of the race at John F. Kennedy Airport where he befriends a crazy but loyal Mexican race-plane named El Chupacabra (Carlos Alazraqui) who eventually falls in love with a beautiful French-Canadian racer named Rochelle (Julia Louis-Dreyfus), who shows little interest in him. Dusty then makes a rival of the arrogant and villainous 3-time winner plane Ripslinger (Roger Craig Smith), who rudely dismisses him as being only a crop duster. Dusty also falls in love with a racer plane named Ishani (Priyanka Chopra), who becomes supportive of him. During the first leg of the race from New York to Iceland, Dusty's refusal to fly high causes him to finish in last place ultimately due to him collecting ice on the wings from the freezing ocean spray and his endurance level to cope with the temperature. During the second leg of the race to Germany, Dusty shows good sportsmanship by saving another racer, Bulldog (John Cleese) from crashing when Bulldog's eyes get squirted with oil from one of his propellers because of a overheated engine, thus winning Bulldog's respect but finishing last again.

In India, Ishani gives Dusty some advice on how to fly low through the Himalayas by following some railroad tracks. However, after encountering a tunnel and barely being able to fly through it, Dusty realizes Ishani deliberately gave him bad advice in order to get a new propeller from Ripslinger and he shuns her. As the race continues, Dusty manages to get into first place. In Shanghai, Dusty manages to help El Chupacabra win over Rochelle with a romantic song. In the next race across the Pacific Ocean, Ripslinger's henchmen, Ned and Zed, under orders from Ripslinger, sabotage Dusty's navigation antenna. Lost and low on fuel, Dusty miraculously comes across the USS "Flysinhower" (a reference to the real-life carrier) which allows him to land and refuel. While on the carrier, Dusty sees a hall of fame set up for Skipper's squadron, but discovers Skipper only flew one mission, which contradicts his previous reputation as a veteran of many battles. He is then forced to take off in order to try and beat an oncoming storm.

Dusty gets distracted from flying due to his thoughts about Skipper and ends up crashing into the ocean but is eventually rescued. He is flown to Mexico to his friends but he is severely damaged and may never fly again. Skipper confesses to Dusty that he did indeed fly only one mission in the Pacific theatre where his entire squad of trainees was killed in an attack on the Japanese Navy. Skipper was the only survivor, but torn by his guilt, he never trained another plane or flew again. Demoralized and heartbroken, Dusty begins to consider dropping out of the race, but is encouraged by his friends, Bulldog, Ishani, and many of his newfound fans to continue and they all donate parts to have Dusty repaired.

With a change of heart and morale restored, Dusty becomes determined to win the race but Ripslinger still won't give up and plots to sabotage his chances of winning. He and his goons ambush Dusty, but are thwarted by Skipper, who overcame his guilt and came to help Dusty. When trying to catch up with Ripslinger, Dusty conquers his fear of heights when his engine starts losing power, forcing him to ride the Jetstream. Both he and Ripslinger make it to the finish line in New York and when it looks like Ripslinger will win, his ego gets the best of him and and slows down to have his picture taken. Dusty manages to fly above him and win the race while Ripslinger crashes into some portable toilets. Dusty is congratulated by his friends and fans and Skipper thanks him for giving him the confidence to fly again. Skipper rejoins the navy with Dusty as his partner and they take a flight together, ending the story.

Planes is based on a concept created by John Lasseter. Although Pixar did produce the film, Lasseter, being chief creative officer of both Pixar and Walt Disney Animation Studios, and director of Cars and Cars 2, was also the executive producer of the film. Jon Cryer was initially announced as the voice of the main protagonist Dusty. Cryer later dropped out of production and was replaced by Dane Cook. A modified version of the teaser trailer for the film (featuring Cook's voice in place of Cryer's) was released on February 27, 2013. 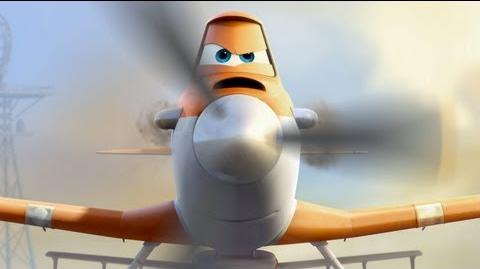