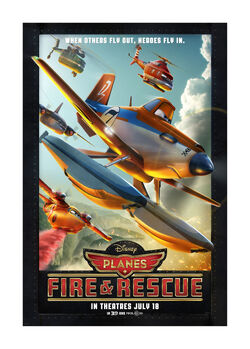 Pixar is working on a sequel to Planes, called Planes: Fire and Rescue. It has been confirmed by Carlos Alazraqui the Planes series will be a trilogy. Instead of publishing an Art of book for the first film, Chronicle Books will publish The Art of Planes 1 & 2 to coincide with the release of the sequel. The sequel was originally titled with the "2", but on June 13, 2013, it was removed from the title. It was also announced to have a 3D theatrical release on July 18, 2014.

Besides the Planes series, Pixar is considering to make more spin-offs that would feature other vehicles like boats and trains, and which may go into production if Planes is well received. John Lasseter said: "I kept thinking about—I’m a big train fanatic. I love trains. And I started thinking about trains, and boats and airplanes. And I kept wanting to have more and more of those type of characters. [...] It’s one of the ideas, that there will be an ongoing series. It almost starts getting into this thing where we fall in love with these plane characters, we want to see more and more stories with them. And then you start doing other vehicles and stuff like that. Yeah. So it kind of is a bigger idea that can keep expanding."

"Planes: Fire & Rescue features a quirky crew of elite firefighting aircraft devoted to protecting historic Piston Peak National Park from a raging wildfire. When world famous air racer Dusty (voice of Dane Cook) learns that his engine is damaged and he may never race again, he must shift gears and is launched into the world of wildfire air attack. Dusty joins forces with veteran fire and rescue helicopter Blade Ranger and his courageous air attack team, including spirited super scooper Lil' Dipper (voice of Julie Bowen), heavy-lift helicopter Windlifter, ex-military transport Cabbie and a lively bunch of brave all-terrain vehicles known as The Smokejumpers. Together, the fearless team battles a massive wildfire, and Dusty learns what it takes to become a true hero."[1]

According to an interview with Bobs Gannaway and Ferrell Barron, the characters Chug, Dottie and Skipper Riley are scheduled to return in the sequel,[2] though it is unknown if Brad Garrett, Teri Hatcher and Stacy Keach will reprise their roles.