Pokémon - Diancie and the Cocoon of Destruction

View src
watch 01:40
Boba Fett Returns - The Loop
Do you like this video?
Play Sound 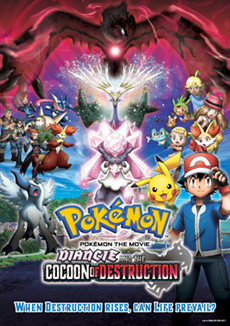 Pokémon the Movie: Diancie and the Cocoon of Destruction (ポケモン・ザ・ムービーXY 「破壊の繭とディアンシー」, Pokemon Za Mūbī Ekkusu Wai "Hakai no Mayu to Dianshī"?, lit. "Pokémon the Movie XY: Diancie and the Cocoon of Destruction") is a 2014 Japanese anime film directed by Kunihiko Yuyama. It is the 17th Pokémon anime movie and the first movie in the XY Series. The movie was released in Japanese theaters on July 19, 2014.[2] The movie features the Jewel Pokémon, Diancie, alongside Xerneas, the Life Pokémon, and Yveltal, the Destruction/Death Pokémon. It was shown on Cartoon Network in the United States, and premiered in Australia and in New Zealand on theaters on November 8, 2014. It was released on DVD and Blu-ray in Japan on December 17, 2014, and on DVD format in the United States on February 17, 2015.