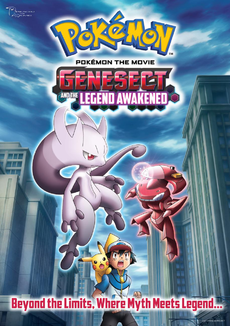 Pokémon the Movie: Genesect and the Legend Awakened, originally released in Japan as Pocket Monsters Best Wishes! The Movie: ExtremeSpeed Genesect: Mewtwo Awakens (劇場版ポケットモンスター ベストウイッシュ 神速のゲノセクト ミュウツー覚醒, Gekijōban Poketto Monsutā Besuto Uisshu! Shinsoku no Genosekuto: Myūtsū Kakusei?) is a 2013 Japanese anime film directed by Kunihiko Yuyama. It is the 16th Pokémon anime movie and the third and the final arc of the Best Wishes series. The movie premiered in theaters on July 13, 2013.[1][2] The movie features Genesect, the Paleozoic and final Pokémon in the fifth generation, as well as Mewtwo. The film was shown on Cartoon Network in the United States, and on CITV in the United Kingdom on October 19, 2013 after Media Factory's retirement of the Pokémon products on October 1, 2013.[3] The film was also shown in the Philippines starting on November 13, 2013, exclusively on SM Cinemas.[4] On December 3, 2013, Viz Media released the movie on DVD in the U.S before the movie released on DVD and Blu-ray in the Japan on December 18, 2013.[5]
Retrieved from "https://movies.fandom.com/wiki/Pok%C3%A9mon_-_Genesect_and_the_Legend_Awakened?oldid=89740"
Community content is available under CC-BY-SA unless otherwise noted.