Pokémon - Hoopa and the Clash of Ages 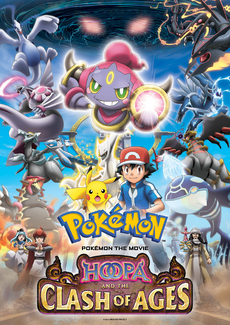 Pokémon the Movie: Hoopa and the Clash of Ages, known in Japan as Pokémon the Movie XY: The Archdjinni of the Rings: Hoopa (ポケモン・ザ・ムービーXY 光輪の超魔神 フーパ, Pokemon Za Mūbī Ekkusu Wai Ring no chōmajin Hoopa?) is a 2015 Japanese anime film directed by Kunihiko Yuyama. It is the 18th Pokémon anime movie and the second movie in the XY Series. The movie premiered in theaters in Japan on July 18, 2015.