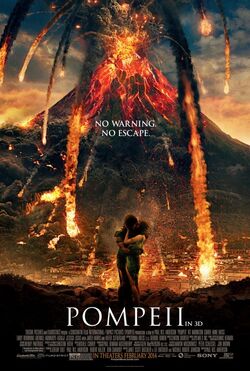 Pompeii is an upcoming American film co-written, produced and directed by Paul W. S. Anderson, the film stars Kit Harington, Emily Browning, and Kiefer Sutherland. It is scheduled to be released in February 2014.

Set in 79 A.D., Pompeii tells the story of Milo (Kit Harington), a slave turned invincible gladiator who finds himself in a race against time to save his true love Cassia (Emily Browning), the beautiful daughter of a wealthy merchant who has been unwillingly betrothed to a corrupt Roman Senator. As Mount Vesuvius erupts, Milo must fight his way out of the arena in order to save his beloved as the once magnificent Pompeii crumbles around him.

Retrieved from "https://movies.fandom.com/wiki/Pompeii?oldid=68266"
Community content is available under CC-BY-SA unless otherwise noted.