Start a Wiki
watch 01:27
The Loop (Movies)
Do you like this video?
Popeye 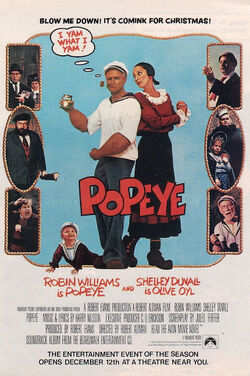 Popeye is the 1980 American musical comedy film directed by Robert Altman. It is a live-action film adaptation of E. C. Segar's Popeye comic strip and stars Robin Williams as Popeye the Sailor Man and Shelley Duvall as Olive Oyl.

Popeye, a sailor, arrives at the small coastal town of Sweethaven ("Sweethaven—An Anthem") while searching for his long-lost father. He is immediately feared by the townsfolk simply because he is a stranger ("Blow Me Down"), and is accosted by a greedy taxman. He rents a room at the Oyl family's boarding house where the Oyls' daughter, Olive, is preparing for her engagement party. Her hand is promised to Captain Bluto, a powerful, perpetually angry bully who runs the town in the name of the mysterious Commodore. In the morning, Popeye visits the local diner for breakfast ("Everything Is Food") and demonstrates his strength as he brawls with a gang of provocative ruffians who give him and the other customers a hard time.

On the night of the engagement party, Bluto and the townsfolk arrive at the Oyls' home. Olive, however, sneaks out of the house, after discovering that the only attribute she can report for her bullying fiancé is size ("He's Large"). She encounters Popeye, who failed to fit in with the townsfolk at the party. The two eventually come across an abandoned baby in a basket. Popeye adopts the child, naming him Swee'Pea, and the two return to the Oyls' home. Bluto, however, has grown increasingly furious with Olive's absence. He realizes that she means to break off the engagement. He eventually flies into a rage and destroys the house ("I'm Mean"). When he sees Popeye and Olive with Swee'Pea, Bluto beats Popeye into submission and declares heavy taxation for the Oyls.

The taxman repossesses the remains of the Oyls' home and all their possessions. The Oyls' son, Castor, decides to compete against the local heavyweight boxer, Oxblood Oxheart, in the hopes of winning a hefty prize for his family. However, Castor is no match for Oxheart and is savagely beaten and knocked out of the ring. Popeye takes the ring in Castor's place and defeats Oxheart, putting on a show for the townsfolk and finally earning their respect. Back at home, Popeye and Olive sing Swee'Pea to sleep ("Sailin'").

The next day, Olive tells Popeye that during his match with Oxheart, she discovered that Swee'Pea can predict the future by whistling when he hears the correct answer to a question. Wimpy, the local con artist and petty gambler, overhears and asks to take Swee'Pea out for a walk, though he actually takes him to the "horse races" (actually a mechanical carnival horse game) and wins two games. Popeye, however, is outraged, and vents his frustrations to the racing parlor's customers ("I Yam What I Yam"). Fearing further exploitation of his child, Popeye moves out of the Oyls' home and onto the docks; when the taxman harasses him, Popeye pushes him into the water, prompting a celebration by the townspeople. In the chaos, Wimpy, who has been intimidated by Bluto, kidnaps Swee'Pea for him. That night, Olive remarks to herself about her budding relationship with Popeye ("He Needs Me"), while Popeye writes a message in a bottle for Swee'Pea ("Swee'Pea's Lullaby").

Wimpy sees Bluto taking Swee'Pea into the Commodore's ship; he and Olive inform Popeye. Inside, Bluto presents the boy to the curmudgeonly Commodore, promising that he is worth a fortune; however, the Commodore refuses to listen, reminding Bluto that his buried treasure is all the fortune he needs. His patience with the Commodore exhausted, Bluto ties him up and takes Swee'Pea himself ("It's Not Easy Being Me"). Popeye storms the ship and meets the Commodore, realizing that he is his father, Poopdeck Pappy. However, Pappy initially denies that Popeye is his son; to prove it, Pappy tries to feed Popeye canned spinach, which he claims is his family's source of great strength. However, Popeye hates spinach and refuses to eat it. Bluto kidnaps Olive as well and sets sail to find Pappy's treasure. Popeye, Pappy, Wimpy and the Oyl family board Pappy's ship to give pursuit. Bluto sails to Scab Island, a desolate island in the middle of the ocean, while Pappy argues with his son and rants about children ("Kids").

Popeye catches Bluto and fights him, but despite his determination, Popeye is overpowered. During the duel, Pappy recovers his treasure and opens the chest to reveal a collection of personal sentimental items from Popeye's infancy, including a few cans of spinach. A gigantic octopus awakens and attacks Olive from underwater (after Pappy saves Swee'Pea from a similar fate). With Popeye in a choke hold, Pappy throws him a can of spinach; Bluto, recognizing Popeye's dislike for spinach, force-feeds him the can before throwing him into the water. The spinach revitalizes Popeye and boosts his strength; he knocks Bluto down in one punch, then swiftly deals with the giant octopus, sending it flying hundreds of feet into the air. Bluto turns yellow and he swims away as Popeye celebrates his victory and his new-found appreciation of spinach ("Popeye the Sailor Man").

According to James Robert Parish, in his book Fiasco: A History of Hollywood's Iconic Flops, the idea for the Popeye musical had its basis in the bidding war for the film adaptation of the Broadway musical Annie between the two major studios vying for the rights, Columbia and Paramount. When Robert Evans found out that Paramount had lost the bidding for Annie, he held an executive meeting in which he asked about comic strip characters that they had the rights to which could also be used in order to create a movie musical, and one attendee said "Popeye".

At that time, even though King Features Syndicate (now a unit of Hearst) retained the television rights to Popeye and related characters, with Hanna-Barbera then producing the series The All-New Popeye Hour under license from King Features, Paramount still held all theatrical rights to the Popeye character, due to the studio releasing cartoons produced by Fleischer Studios and Famous Studios, respectively, that lasted from 1932 to 1957.

Evans commissioned Jules Feiffer to write a script. In 1977, he said he wanted Dustin Hoffman to play Popeye opposite Lily Tomlin as Olive Oyl, with John Schlesinger directing.

In December 1979, Disney joined the film as part of a two-picture co-production deal with Paramount which also included Dragonslayer. Disney acquired the foreign rights through its Buena Vista unit; the deal was motivated by the drawing power that the studio's films had in Europe.

The film was shot in Malta. The Sweethaven set that was built for the film still exists, and it is now a popular tourist attraction known as Popeye Village. According to Parish, Robin Williams referred to this set as "Stalag Altman".

Popeye premiered at the Mann's Chinese Theater in Los Angeles on December 6, 1980, two days before what would have been E.C. Segar's 86th birthday.

The film grossed $6 million on its opening weekend in the U.S., and made $32,000,000 after 32 days. The film earned $49,823,037 at the United States box office — more than double the film's budget — and a worldwide total of $60 million. Although the film's gross was decent, it was nowhere near the blockbuster that Paramount and Disney had expected, and was thus written off as a flop.

The film received overall mixed reviews: some favorable, from critics such as Roger Ebert; others unfavorable, from critics such as Leonard Maltin, who described the picture as a bomb: "E.C. Segar's beloved sailorman boards a sinking ship in this astonishingly boring movie. A game cast does its best with an unfunny script, cluttered staging and some alleged songs. Tune in an old Max Fleischer cartoon instead". Rotten Tomatoes gave the film a 59% "Rotten" rating with the critical consensus stating [that] "Altman's take on the iconic cartoon is messy and wildly uneven, but its robust humor and manic charm are hard to resist".

The soundtrack was composed by Harry Nilsson, who took a break from producing his album Flash Harry to write the score for the film. He wrote all the original songs and co-produced the music with producer Bruce Robb at Cherokee Studios. The soundtrack in the film was unusual in that the actors sang some of the songs "live". For that reason, the studio album did not quite match the tracks heard in the film. Van Dyke Parks is credited as music arranger.

In the U.S. trailer for the film, which contained the song "I Yam What I Yam", the version heard of the song was from the soundtrack album, not the film.

The song "Everything Is Food" was not included on the album, while the song "Din' We" (which was cut from the film) was included.

"I'm Popeye the Sailor Man" was composed by Sammy Lerner for the original Max Fleischer cartoon.

Retrieved from "https://movies.fandom.com/wiki/Popeye?oldid=232260"
Community content is available under CC-BY-SA unless otherwise noted.