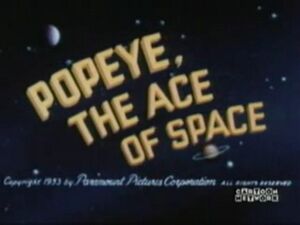 Popeye, the Ace of Space is 199th Popeye theatrical cartoon, produced by Famous Studios and released by Paramount Pictures in 1953. This film is notable for being originally released as a 3D film.

Popeye drives along a country road in his boat-shaped car. When he sees that a bridge is out, he takes care of the problem with the help of some spinach. Meanwhile, deep in outer space, an alien spaceship approaches Earth with its occupants bent on finding and abducting an average Earthman to conduct their tests on. They find Popeye instead, and snatch him away from his car via a propeller-mounted plunger. Later, the ship arrives at its planet of origin (determined by Popeye to be Mars). Many green-skinned aliens are in attendance as the Earthman is put on the first of their sinister machines: a Cosmic Ager that soon makes him turn 125. Not amused by the experiment, he counters by eating his wonder vegetable, and reverts back to age two. After the child regurgitates some excess spinach, he goes back to age 40. Next, he is strapped to a cruel contraption that would drop the huge "Atom Apple Smasher" upon his outstretched neck. Perusing a third can of spinach makes his Adam's apple as hard as Gibraltar and the massive hammer is split in two. The abductors then successfully try disintegrating the powerful being and, when his last spinach can is all that is left of him, the aliens fight for the source of his great might. Popeye is not entirely gone, however, and his invisible hand secures the spinach. Visible and strong again, he joins the spacemen's fight until they are finally pacified. He then borrows their spaceship and safely travels back to Earth as he sings "The Martians were hateful, but now they are playful 'Cause of Popeye the Sailor Man!".

Retrieved from "https://movies.fandom.com/wiki/Popeye,_the_Ace_of_Space?oldid=88083"
Community content is available under CC-BY-SA unless otherwise noted.