Start a Wiki
watch 16:45
The Loop (Movies)
Do you like this video?
Por Las Plumas 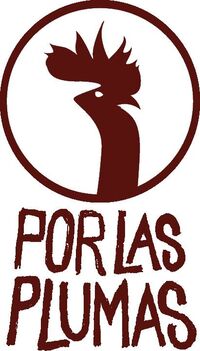 Por Las Plumas (English title: "All About the Feathers") is a black comedy, released on September 6, 2013. It tells the story of Chalo, a lone security guard who acquires his first gamecock, but instead is unconsciously seeking a companion and discovers the bittersweet taste of friendship.

It is a comedy that tells the story of Chalo a lone security guard who wants a fighting cock. Once you get it, your life changes. Not having a good place to raise him and train him, a series of comic situations that will test the passion and love of Chalo by his new "friend" are triggered.After buying a fighting cock called Rocky, bored security guard Chalo gets mixed up in absurd but also awkward situations.

The cock's crowing is not appreciated at home, but even at a deserted industrial terrain problems arise. Cock fighting is an illegal but extremely popular pastime amongst Costa Rica's working class, and Chalo and his constant companion Rocky make new friends and allies all over.

With deadpan humour, “All About the Feathers” moves at a cracking pace as Chalo’s monotonous life grows increasingly colourful. It’s a polished and humorous look at regular folks trying to survive life today. The movie shows the romance of a security guard with a rooster and how working class people can support and build friendships in this civilized world by accepting each other for who we are.

Por Las Plumas was written and directed by Neto Villalobos and was filmed on Costa Rica. A majority of the financial backing necessary to make the film was obtained from traditional sources within Costa Rica and overseas, but the remaining money needed for the budget was obtained via crowdsourcing on Indiegogo.[1]

Five works in progress selected at the Buenos Aires Lab (BAL), BAFICI’s Latin American co-production market, which celebrated its 10th anniversary in 2013, was showned at the Marché du Film of the Cannes Film Festival, held in the French Riviera. They are Algunas chicas, by Santiago Palavecino (Argentina); Depois da chuva, by Claudio Marques and Marília Hughes (Brazil); La Once, by Maite Alberdi (Chile); Por las plumas, by Neto Villalobos (Costa Rica); and Reimon, by Rodrigo Moreno (Argentina), selected to participate in the first collaboration of this kind with the prestigious international film market that runs in parallel with the famous festival. In this way, BAL consolidates itself as a “key place for Latin American projects,” according to BAFICI Artistic Director Marcelo Panozzo. “The Festival is comprehensively supported by its films: the movies screened and those that are not yet finished, which are at the shooting or editing stage, which are a script or an idea,” he added.

Fabian Wagmister Faculty UCLA Film Week opens National Cinema NECTV by Veritas University. This Friday (28) February all invitees to watch free on the feathers in Veritas University at 7pm. There will also be the film crew and actors to answer and discuss your concerns. • February 28, 2014

The event will take place from 3 to 9 April 2014, a week in which Panama will be the capital of Latin American cinema with the holding of the first edition of the Latin American co-production market and delivering meets Platinum Awards, awards that recognize the best.

"Por Las Plumas" is in the official jurisdiction of the Cinelatino Rencontres de Toulouse.

In the main competition for feature films Costa Rican film appears on the feathers , Net Villalobos of "Por las Plumas", along with 13 other films from Argentina, Brazil, Ecuador, Uruguay, Chile, Mexico and Colombia. Apart from Toulouse, coming on the feathers will also be present at festivals in Prague, Cleveland, Curacao, Buenos Aires and BAFICI IFF Panama.

In the main competition for feature films Costa Rica appears on the feathers , Net Villalobos, along with 13 other films from Argentina, Brazil, Ecuador, Uruguay, Chile, Mexico and Colombia. Apart from Toulouse, the film soon will also be present at festivals in Prague, Cleveland, Curacao, Buenos Aires and BAFICI IFF Panama.

SFIFF57's World Cinema Spotlight is on New Voices in Latin American Cinema. Hailing from Argentina, Mexico, Uruguay, Venezuela, and Costa Rica (a SFIFF first!), these films pit the personal against the political. They show the human side of cockfighting, measure the economic and personal repercussions of a 10-year-old’s desire to straighten his hair, and explore the tension between a young man’s revolutionary ideals and the interests of his family business. Here’s a peek at the great films coming to this year’s festival from south of the border. http://www.sffs.org/

On Sunday the 27 April 2014 we will have free screening of” About the Feathers” in Multiplaza Escazu Costa Rica at 4:00 pm, followed by a short session of questions and answers with some of the principal cast and crew. Buena activity Sunday, hope to see you there!

* It is all about the Latin Wave 9 ("Por Las Plumas") will be screened on April 29 to May 4 2014. However these days we are participating together for 9 wonderful films in The Museum of Fine Arts, Houston (TX) USA.

The San Francisco International Film Festival is in full swing upto April 24 to 8 May 2014. Amongst the more than 150 movies that will screen this year are several must-see Latino films at SFIFF. Ernesto “Neto” Villalobos was in town to present his film "Por las plumas" (All About the Feathers), the first Costa Rican production to screen at SFIFF in its 57-year history. http://www.remezcla.com/2014/latin/ernesto-villalobos-director-costa-rica-por-las-plumas/

"Anyone who’s been to Costa Rica will recognize pura vida in this sweet, lighthearted comedy about four Ticos who become fast friends and business partners in the cockfighting business.

Travelling Film Festival held its third edition this year in 2014. The tour will be headlined by national films "Puerto Padre" Gustavo Fallas and "By Por Las Plumes" Net Villalobos. The international surprise given the film "Marley" by Kevin Macdonald, work that chronicles the life of legendary musician Bob Marley and reaches our screens thanks to the local independent distributor Pacific Grey.

Celebrating its 25th edition, the AFI Latin American Film Festival showcases the best in cinema from Latin America with the inclusion of films from Spain and Portugal.

American Film Institute's Latin American Festival September 18- October 8, 2014 -Highlights of the festival include a FREE sneak preview of animated adventure THE BOOK OF LIFE, produced by Guillermo del Toro; Argentine thriller 7TH FLOOR, starring Ricardo Darín; PARADISE, a light-hearted rom-com about weight loss from Mexico's Mariana Chenillo (NORA'S WILL); TO KILL A MAN, winner of the Grand Jury Prize in the World Cinema Competition at the Sundance Film Festival; Spanish filmmaker David Trueba's LIVING IS EASY WITH EYES CLOSED, winner of six Goya Awards; Brazilian animated fantasy THE BOY AND THE WORLD, awarded the top prize at this year's Annecy Animated Film Festival; Chile's ILLITERATE, starring Paulina García (GLORIA); Costa Rica's deadpan cockfighting comedy ALL ABOUT THE FEATHERS; the US premiere of Colombia's GENTE DE BIEN, straight from its debut at the Cannes Film Festival; and the world premiere of THE CROW'S NEST, the first narrative feature from El Salvador in more than 40 years. http://afi.com/Silver/laff/

Who walk today by the international fair of the book Costa Rica? This cock is there today at 7:00 pm on 27 Aug 2014, at the Theatre de La Aduana Costa Rica. Free entrance. (Feria Internacional Del Libro Costa Rica?)

We look forward to see them!

* In Por Las Plumas (About the Feathers) Chalo, Jason and his friends will be at the Trinidad & Tobago Film Festival, so invite your friends or family! 199 Belmont Circular Road, Port of Spain, Trinidad+Tobago http://www.ttfilmfestival.com/2014/09/film-focus-difret/ September 16-30, 2014.

I am deeply saddened by the passing away of Marvin. We'll always remember Marvin and feel lucky that we had the pleasure of knowing him through the movie Por Las Plumas. He was a wonderful actor and a simple human being. He will be greatly missed. May his soul RIP : Raj Kosaraju

Retrieved from "https://movies.fandom.com/wiki/Por_Las_Plumas?oldid=77614"
Community content is available under CC-BY-SA unless otherwise noted.