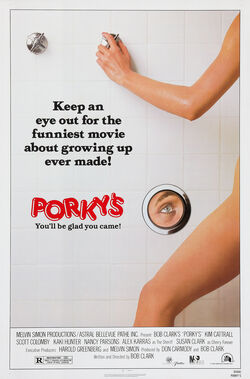 Porky’s is a 1981 Canadian-American sex comedy film, written and directed by Bob Clark about the escapades of teenagers at the fictional Angel Beach High School in Florida in 1954. Released in the United States in 1982 with an R rating, the film spawned three sequels: Porky’s II: The Next Day, Porky’s Revenge!, and Pimpin' Pee Wee, and influenced many writers in the teen film genre.

Despite generally negative critical reception, Porky's was a box office success. It was the fifth highest-grossing film of 1982.

A group of Florida high school students plan on losing their virginity. They go to Porky's, a nightclub out in the Everglades, believing that they can hire a prostitute to satisfy their sexual desires. Porky takes their money but humiliates the kids by dumping them in the swamp. When the group demands their money back, the sheriff, who turns out to be Porky's brother, arrives to drive them away, but not before his minions extort the rest of their money and cause them more embarrassment. After Mickey (who returned to Porky's for revenge) is beaten so badly he has to be hospitalized, the gang becomes hellbent on exacting revenge on Porky and his brother, eventually succeeding in sinking his establishment in the swamp. Porky and his men, joined by the sheriff, chase after the group, but they make it across the county line (out of Porky's brother's jurisdiction), where they are met by a group of the local police officers, one of whom is Mickey's older brother Ted, and the high school band. After Ted repeatedly damages Porky's car, he says that all charges against Porky for driving an unsafe vehicle will be dropped if the night's events are forgiven. Because the boys were too young to be legally allowed in Porky's in the first place, Porky and his brother have no choice but to agree. The film ends with the group getting their revenge and Pee Wee finally losing his virginity.

In a subplot, the boys also peep on female students in their locker room shower. After (apparently) several unsuccessful attempts, Tommy, Billy and Pee Wee finally see several girls showering, but Pee Wee gives them away when he shouts at a particularly fat girl (who has been blocking his view) to move so he can see. While a few girls run out, most stay, finding the situation funny. To test their attitude, Tommy sticks his tongue out through his peephole, but gets it smeared with soap. Infuriated, he drops his pants and sticks his penis through the opening just before female coach Beulah Balbricker (who has a running feud with Tommy) walks into the shower area. Spotting the protruding member, she sneaks up on Tommy, grabs his protruding part and pulls with all her might. Tommy manages to pull free and escape, but Beulah is now determined to prove that the offending member (which has a mole on it) belongs to Tommy, going so far as to request that Principal Carter hold a police-type line-up of the boys in the nude so she can identify it. However, Carter balks at such a request, and while the other basketball coaches laugh almost uncontrollably, Coach Brackett suggests getting the police involved. When this gets even Carter laughing, Balbricker leaves in a huff. The film ends with Ms. Balbricker sneaking out of the bushes to ambush Tommy and actually dragging his pants down, but she is pulled off him by police and dragged away screaming that she saw "it" and that she can identify him. The film ends as Tommy breaks the fourth wall and saying "Jeez!" to the camera.

Porky's was released in Colorado Springs, Colorado on November 13, 1981. It then received a wide release in Canada and the United States on March 19, 1982.

Porky's received negative reviews. Review aggregation website Rotten Tomatoes gives the film a score of 30% based on reviews from 23 critics.

Film critics Gene Siskel and Roger Ebert were offended by Porky's and later called it one of the worst films of 1982. In particular, they criticized the film for its objectification and degradation of women and the childish nature of its antagonists.

Although it was written and directed by an American and was filmed in Miami, Florida, Porky's was produced by the Canadian company Astral Media. As a result, Porky's can be classed as the highest-grossing Canadian film of all time in Canada's domestic box office, with a total of C$111 million by 1999.

The first two Porky's films were directed by Bob Clark and produced by Harold Greenberg, who founded Astral Communications (now known as Astral Media). James Komack directed the third film, Porky's Revenge. Clark based the original Porky's on actual occurrences at Boca Ciega High School in Gulfport, Florida and Fort Lauderdale High School in the early 1960s, and on a venue called Porky's Hide Away in Oakland Park, Florida.

Following the success of Porky's in America and Europe there was a sequel in 1983 titled Porky's II: The Next Day. The sequel was poorly received by critics, and was less commercially successful than the original. Bob Clark did not want to make another film in the series, so director James Komack made the third and last part of the saga. The film was called Porky's Revenge!, and was the worst-received of the series both critically and commercially.

On May 22, 2007, 20th Century Fox Home Entertainment released all three films in an "Ultimate Collection" box set on DVD.

The DVD of the film from the "Ultimate Collection" was also released as a stand alone release called the "One Size Fits All" Edition and includes a retrospective featurette with Bob Clark, a discussion on how Porky's is a comedy classic, movie commentary by Bob Clark, the theatrical trailer, two television spots, trailers for Porky's II: The Next Day and Porky's Revenge!, and the sales pitch for the Porky's video game.

In 2002, Howard Stern acquired the remake rights and has long hoped to produce a remake of the film. The potential remake ran into legal trouble in 2011 when two other production companies stepped forward claiming to own the rights to the franchise. A VOD sequel, Pimpin' Pee Wee, was filmed in 2009.

Retrieved from "https://movies.fandom.com/wiki/Porky%27s?oldid=119151"
Community content is available under CC-BY-SA unless otherwise noted.