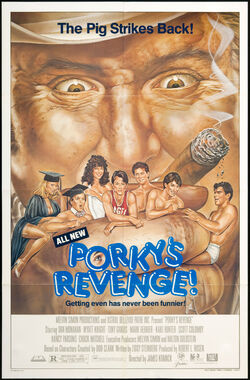 Porky's Revenge! is a 1985 sex comedy film and the third and final film of the original Porky's film series. The film was directed by James Komack.

Porky now owns a riverboat with a casino and strip club. According to Brian, Porky is extorting money from Coach Goodenough because he has a gambling debt. The gang decide to go to the boat to take pictures of the illegal casino to give to the D.A. During this time, Meat runs into Porky's sex-crazed daughter, Blossom, who forces herself on him. The boys' plan fails because Porky catches them in the act and is about to kill them. But when they mention the State Championship game, he realizes that they could help him out by throwing the game so he can bet against them.

Later at school, Meat is unable to dissect a frog in science class. Fearing he could become academically ineligible to play in the championship game, the gang goes to Miss Webster's apartment to get a copy of the final exam. They discover her and Mr. Dobish, the school's guidance counselor, having rather kinky extramarital relations.

A letter is written to Ms. Balbricker arranging a rendezvous at a motel with an old boyfriend of hers, while Pee Wee is enticed to the same motel room by the promise of a night of passion with a beautiful Swedish exchange student. Tommy tricks Pee Wee into going to another location while he heads to the motel room. Ms. Balbricker arrives first followed by Tommy, and they are horrified to find themselves unclothed and in bed with each other. To make up for their prank on Ms. Balbricker, the gang contacts her old boyfriend and actually gets them together.

During the final game, Meat is benched because Miss Webster intentionally failed him. She discovers the blackmail photos and a note, causing her to change her mind. The second half resulted in a victory for Angel Beach while Porky is outraged. Blossom tells him that Meat is her boyfriend and they "went all the way," infuriating him even more. He then suggests to his two subordinates that Meat and Blossom be married.

During the senior prom, Meat is abducted by Porky and his men. The gang go after them. Just as the wedding is about to start, the power goes out and Meat is liberated by Billy and Brian. Billy, Brian, and Meat begin their escape in a motorboat, with Porky's boat chasing them closely. The chase ends after the guys make it through a drawbridge, with Pee Wee then lowering the bridge, resulting in the destruction of Porky's boat.

At graduation, the guys trick Pee Wee into taking off all his clothes, except the graduation gown. As he's about to get his diploma, Principal Carter steps on the gown, causing it to come off and reveal Pee Wee in his nudity, just as he dreamed at the beginning of the film.

The film had a budget of nearly $8 million, much of which went on building a large gambling boat. The producers used a $20 million Miami Island mansion, Vizcaya, as a key setting.

The film was the directorial debut of James Komack, who said "I'm not going to whitewash the bawdiness or clean up the tone of their antics."

Komack thought the sequel, "failed to understand their own formula. Porky's touched on reality, it presented a cross-section of adolescent sex life during a certain time frame. Bob apparently tried to elevate his big success and use it to portray a message. But the original was not a film about humanity; it was a film, pure and simple, about teen-age sex. The sequel, a whitewash of the original, didn't play."

Nancy Parsons had lost a considerable amount of weight since the first film. She did the sequel for a percentage of the profits.

The film received negative reviews from critics, with review aggregator Rotten Tomatoes gives the film a score of 27% based on reviews from 11 critics. Gene Siskel gave the film zero stars out of four, writing that "the comedy here operates at the stag party level... a 1950 stag party." Janet Maslin of The New York Times called it "just another brand-name teen-age movie ... Some of it is funny, but it's also entirely predictable." Variety noted that the film "barely earns its R rating" and that James Komack's direction "does little to enliven the proceedings," calling the soundtrack "one of the film's few bright spots." Michael Wilmington of the Los Angeles Times called it "a sorry excuse for a movie: loud, lewd, witless and crass ... you might be advised to skip the movie and go directly to the sound-track album." Leonard Maltin's film guide assigned its lowest possible rating of BOMB and wrote, "Beware of high-school seniors with post-collegiate hairlines: these guys are starting to look older than the mid-'50s Bowery Boys. This revenge is preferable to Montezuma's—but not by much."

The movie was nominated for a Stinkers Bad Movie Award for Worst Picture.

Porky's Revenge! soundtrack was released in 1985. Produced and assembled by Dave Edmunds, the soundtrack features new material from a wide spectrum of well-established rock & roll musicians, including Jeff Beck, George Harrison, Carl Perkins, Willie Nelson and Robert Plant & Phil Collins (under "The Crawling King Snakes" moniker), as well as then up-and-comers The Fabulous Thunderbirds. Besides George Harrison's recording of a previously unreleased Bob Dylan song ("I Don't Want to Do It") and Dave Edmunds' "High School Nights" and Porky's Revenge! theme music, the album consists of newly recorded versions of classic rock & roll tunes (sometimes by their original author, in the case of Carl Perkins). Stephen Thomas Erlewine of AllMusic called it "far more fun than the accompanying film" and said, although disliking some of the '80s production flourishes, "it's far better to dwell on the fact that a third-rate sequel like Porky's Revenge! could produce a soundtrack this good, because that is a mystery for the ages."

"High School Nights" b/w "Porky's Revenge" and "Do You Want to Dance?" b/w "I Don't Want to Do It" were released as singles.

Retrieved from "https://movies.fandom.com/wiki/Porky%27s_Revenge!?oldid=152884"
Community content is available under CC-BY-SA unless otherwise noted.