Start a Wiki
Porky’s II: The Next Day 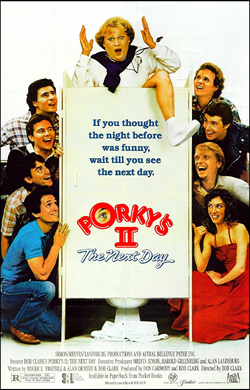 Porky's II: The Next Day is the 1983 sequel to the 1982 film Porky's. The film is co-written and directed by Bob Clark. Unlike the previous film, Porky himself does not appear.

The Angel Beach High School Drama Club is producing a Shakespeare Festival in which the group from the first film is participating. Unfortunately, a religious leader named Bubba Flavel wants to halt the production because he and his group, "The Righteous Flock," maintain that Shakespeare is indecent and profane. The gang seeks out the help of Seward County Commissioner Gebhardt, who initially promises that he will pull some strings to keep the Shakespeare Festival running. However, the gang quickly learns that Gebhardt only agreed in order to secure a date with seventeen-year-old Wendy. When Wendy refuses him, he reneges on his promise. The local Ku Klux Klan chapter joins the movement to shut down the Shakespeare Festival when the Klan learns that John Henry, a Seminole student, will play Romeo opposite a white Juliet played by Wendy. Flavel welcomes the Klan's support of his movement. The Angel Beach gang plot their revenge against Flavel, Commissioner Gebhardt, the rest of the county commissioners, and the Klan.

The teens discover that the county commissioners, who are publicly riding the political wave of decency and morality, secretly gather to watch pornographic movies in the courthouse basement. The gang takes a tape recorder to the courthouse basement and record the commissioners' crude commentary on the films, which include remarks that Flavel provided the pornography.

Wendy informs the gang of Gebhardt's attempt to seduce her, and they agree to help her get revenge. Pretending that she has changed her mind, Wendy agrees to an out-of-town dinner date with Gebhardt. Wendy arrives at the restaurant dressed in a deliberately showy, vulgar gown with her breasts artificially inflated by a secret container of fake vomit. All through dinner, she constantly shouts out Commissioner Gebhardt's name, his upcoming reelection, and her own age, alerting the other patrons to the situation. Once she has the attention of the entire restaurant, she announces that Gebhardt took her virginity while she was still a Girl Scout Cadette and that she is now carrying his child. Finally, to complete Gebhardt's humiliation, she uses the fake vomit concealed in her dress to pretend to throw up in a fountain. When Gebhardt tries to sneak away, Peewee jumps out with a camera to capture his humiliation, with the promise to send the photos to the local newspapers.

Meanwhile, the Klan attack and beat John Henry for refusing to give up his role as Romeo. Learning of this, the gang lures the Klan members (who are on their way to Flavel's celebratory revival meeting at the high school) into the school gym, where a group of Seminoles hold down the Klansmen while the gang's Jewish friend Brian shaves their heads with an izmel. The Angel Beach gang and the Seminoles then strip the Klansmen naked and force them to run across the stage of Flavel's revival. Flavel feigns shock and denounces the naked men, whom he pretends not to know. While this is happening, the gang commandeers the public address system and plays the recording from the courthouse basement. The outraged crowd turns on both Flavel and the county commissioners. Their revenge complete, the gang departs just in time for the reinstated Shakespeare Festival, which is a roaring success.

Greynolds Park in North Miami, Florida stood in for the Everglades and a plant nursery on Old Cutler Road was turned into a cemetery for the graveyard scenes.[2]

On May 22, 2007, Porky's II: The Next Day was released on DVD, alongside Porky's and Porky's Revenge in a DVD box set called "The Porky's Ultimate Collection".

On December 13, 2016, Kino Lorber released Porky's II: The Next Day, along with Porky's Revenge as a double feature Blu-Ray. The theatrical trailer for the film is the only bonus material on the disc.

The film's gross receipts were considerably lower than the first Porky's film. While Porky's grossed $105 million in the North American market, Porky's II: The Next Day only took in $33,759,266.

Porky's 2: The Next Day was critically panned. Review aggregator Rotten Tomatoes gave the film a score of 11% based on the reviews of 9 critics. The movie was nominated for a Stinkers Bad Movie Awards for Worst Picture.

Retrieved from "https://movies.fandom.com/wiki/Porky%E2%80%99s_II:_The_Next_Day?oldid=119150"
Community content is available under CC-BY-SA unless otherwise noted.