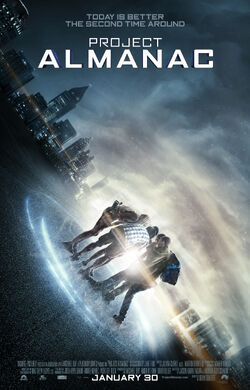 In 2014, 17-year-old high school senior and aspiring inventor David Raskin is admitted into Massachusetts Institute of Technology, but is unable to afford its tuition fees. Upon learning his mother, Kathy, is planning to sell the house, David enlists his sister Christina and his friends Adam Lee and Quinn Goldberg to search through the belongings of his father Ben, an inventor who died in a car crash on David's seventh birthday, in the hope of finding something that David can use to get a scholarship. David finds an old camera with a video recording of his seventh birthday party, in which he briefly spots his 17-year-old self in a reflection. Noting how he appears to be reaching for a basement light switch in the reflection, David, Christina, and friends go to the basement, that was forbidden by Ben. Underneath a trapdoor activated by the basement switch, the group uncovers the blueprints of a time travel device that Ben was developing called "Project Almanac," and use the available resources to build a functional time machine. David, Christina, Adam, and Quinn later use the battery from the car of David's longtime crush, Jessie Pierce, to charge up the machine, and successfully send a toy car back in time for testing, but blow out the power for the entire neighborhood. They end up being caught by Jessie and recruit her to their experiment.

David, Jessie, Christina, Adam, and Quinn eventually travel back in time to yesterday and break into Quinn's house, where he draws a smiley face on the back of the neck of his sleeping past self (which simultaneously appears on the back of the visiting Quinn's neck). However, he awakens and seeing his future self that causes a feedback loop nearly erases them both from the timeline. The five agree to use the machine for personal gain on the condition that they always use it together. Adam uses it to win the lottery, Christina gets back at her bullies, Quinn aces a chemistry test to secure his academic future, and the group eventually decides to travel back to Lollapalooza three months before. David hesitates to declare his feelings for Jessie and their relationship becomes awkward. He decides to travel back early alone to change that, leading to a future in which they are a couple. When he returns, Adam and Quinn find that the blackout caused by them resulted in their school's star basketball player getting hit by a vehicle and breaking his leg; the team does not make it to the championships, and those that would have attended go elsewhere, including the player's father, a pilot who ends up crashing a commercial airliner, along with multiple other disasters around the world, which did not happen in their original timeline. David goes back alone again and prevents the accident that would lead to the player's injury and averts the plane crash. He returns to the present to learn that instead Adam is in critical condition in a hospital after being run over.

David continues to travel back in time to rectify the poor outcomes, but ultimately is caught by Jessie during one of his trips, inadvertently sending her back with him. Jessie confronts David, who is forced to admit to using the time machine to win her affection. As Jessie condemns David for his deception, her past self runs up, causing another feedback loop and Jessie is erased from the timeline. David comes to a decision to go back to prevent the machine from being created to undo all of its time-traveling effects, but the machine is out of hydrogen. As David returns to the present, he is confronted by the police, who suspect him of being involved in Jessie's disappearance. Narrowly evading the manhunt after him, David is able to get to his school and obtains a hydrogen canister. He manages to activate the machine just as the police break into the supply room, and sends himself back to the day of his seventh birthday.

In the basement, David confronts his father Ben, who recognizes him and realizes that this means he will eventually complete Project Almanac. David convinces Ben the dangers of time-traveling and tells him that he should say goodbye to his son. And so, David destroys the blueprints and a vital component, causing him to be erased from the timeline. In any case, the camera he and his friends have been using all along is left behind and records the whole thing. Back in the future, David and Christina are once again going through their father's belongings, where they find their father's camera as well as the alternate David's camera. This second camera still contains all the footage of David and the group from the original timeline, including the original recording of him and Christina finding only one camera in the attic. Stunned to see this, they go through all the footage and see their adventures traveling through time. Later, at school, David approaches Jessie for the first time once again, displaying knowledge of the future, and confides in her that they are about to "change the world."