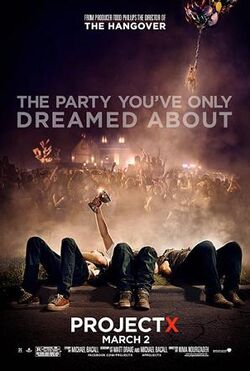 Project X is a comedy/drama film based on a story by Michael Bacall. Nima Nourizadeh directs, while Todd Phillips (The Hangover) is credited as producer, and screenplay duty falls on the aforementioned Bacall and Matt Drake. Starring Oliver Cooper, Thomas Mann, and Jonathan Daniel Brown, the film centers around a group of teenagers who are making a home video about a house party they're throwing that gets out of hand. Filming for Project X (in the style of an amateur home video) began June 14, 2010 in Los Angeles, and it is set for a March 2, 2012 release date.