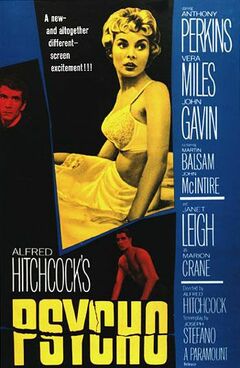 Psycho is a 1960 American psychological horror film directed and produced by Alfred Hitchcock, and written by Joseph Stefano, starring Anthony Perkins, Janet Leigh, John Gavin, Vera Miles and Martin Balsam, and was based on the 1959 novel of the same name by Robert Bloch

Bloch's novel was adapted into an acclaimed black-and-white feature film in 1960 by Alfred Hitchcock. The affecting, subtly humorous screenplay was written by Joseph Stefano, and, overall, is quite faithful to the novel. Commonly regarded as one of Hitchcock's best films, Psycho has also been acclaimed as one of the most effective horror films. The film spawned several sequels, though they are generally seen as works of lesser quality.

The movie's first scene takes place in a cheap hotel room and shows Marion Crane (Leigh) and her boyfriend Sam Loomis (Gavin) in their undergarments after a Friday afternoon tryst. Marion is clearly unhappy, torn between her desire to be with Sam and her shame at these discreet meetings. But, Sam explains that between his father's unpaid debts and alimony payments to his ex-wife he is forced to live in the back room of a store. Until his finances improve, they cannot marry. Marion returns to find that her boss has just sold a house to the rich Tom Cassidy (Frank Albertson), for $40,000. Cassidy flirts with Marion, asking if she is "unhappy." "You know what I'd do about unhappiness," he tells her, "I'd buy it off." He then plops down $40,000 in cash, explaining that his daughter has never had an unhappy day in her life and this house is to be her wedding present. Marion's boss is uncomfortable with that amount of cash in the office and asks Marion to deposit it at the bank for the weekend, explaining that he'll get Tom to write a check the next week. Instead of depositing the money she packs and leaves town, the money the ticket to her and Sam's happiness.

Hitchcock builds his trademark tension as Marion becomes convinced that people know of her crime, trading her Granny Smith apple-green 1956 Ford Mainline for a golden white 1957 Ford Custom 300 just across the state line in California, because she believes she is being followed. Driving at night in a pouring rain, Marion realizes that she can go no further and turns off at the sign for the Bates Motel. The place seems deserted, but she notices the figure of a woman in the window of the now infamous house around back. Honking her horn for service Norman Bates (Perkins), runs down from the house and helps her into the office.

The motel, he explains, receives few visitors, as the Interstate 5 highway has bypassed Route 99 she was following. Only those who are lost or take the wrong turn ever come here, but Norman keeps it open to give him some relief from taking care of his ill mother. Despite finding out that she is only 15 miles from Fairvale, and Sam, Marion decides to stay the night. Norman cheerfully offers to share his dinner with her rather than force her back out into the storm. While settling into her room Marion overhears a fight between Norman and his mother through the open window. The mother refuses to allow Marion to come up to the house, accusing Norman of a "cheap erotic mind" that "disgusts" her and of him lacking the "guts" to send Marion away. Norman sheepishly brings some food down to the motel, inviting Marion to dine in the office's parlor, which is gaudily decorated with examples of Norman's hobby of taxidermy: birds being his favorite subject. As she eats, Marion discovers that Norman's mother is not only ill, but also overly controlling of her son. "Do you ever go out with friends?" she asks. "Well a boy's best friend is his mother," he replies. As they talk Marion comes to realize that she must return to Phoenix and make amends.

It turns out that Bates' mother is not ill physically, but mentally. She stabs Marion to death in the famous shower scene (with its now trademark score by Bernard Herrmann, featuring the screeching violins). Unlike Mary from the novel, Marion is not decapitated in the scene. Bates is horrified when he finds the corpse, but cleans up as if he has done this several times before. Her car containing Marion, her belongings, and the money is sunk in a swamp behind the Bates' property.

The rest of the film deals with the search for Marion. Marion's sister Lila (Miles) drives to Fairvale to confront Sam, unable to believe that her sister took the money. As they talk another individual arrives, a private detective Milton Arbogast (Balsam), sent by Tom Cassidy to recover his money. Arbogast explains that he was following Lila in hopes that she would lead him to Marion. It soon becomes clear, however, that Sam is unaware of either Marion's whereabouts or the theft. Arbogast then is able to trace her to the Bates Motel, calling Lila and Sam to let them know. But Arbogast's curiosity proves fatal when, upon returning to the motel, he climbs up to the old house to talk with mother and is stabbed by the same figure that killed Marion.

When the detective fails to report back, Sam and Lila become convinced that he must have discovered something important, possibly from Norman's mother, and decide that it is time to involve the law. But the local sheriff is skeptical of their story, or that Norman's mother could have any important information. For Norman, he explains, lives alone at the Motel, his mother having died 10 years earlier in a particularly gruesome murder/suicide.

Lila and Sam realize that they must go to the motel themselves to see what Arbogast had discovered. While Sam distracts Norman down at the office, Lila goes up to the house to talk with mother. Sam tries to pressure Norman into admitting that he stole Marion's money, but the argument escalates into violence and Norman is able to knock Sam unconscious, and flee up to the house. Hearing Norman enter the house, Lila slips down to the basement and is shocked and horrified only to find the corpse of Bates' mother. A figure with a dress and knife tries to kill Lila and at that moment the killer is revealed to be Norman Bates himself (cross-dressed in his mother's clothing, complete with wig). Sam also appears at this moment and is able to wrestle the butchers knife out of Norman's clawed hand.

At the end of the film a forensic psychiatrist (Oakland) explains to Lila, Sam and the police that not only has Norman confessed to the killings of Marion, Arbogast and two missing girls, but explains that Bates' mother, though dead, lives in Norman's psyche. Norman was so dominated by his mother, and so guilt-ridden over having murdered her and her lover 10 years earlier when it appeared she was about to remarry, that he had tried to "erase" the crime from his mind by bringing his mother back. Physically this was done by exhuming her corpse and preserving it with his taxidermy skills, but mentally this was accomplished by allocating half of his personality to his mother. He acted as she would, talked as her, and even dressed as her in an attempt to erase her absence. And because Norman was so very jealous of his mother, he assumed she was also jealous of any woman he was attracted to. The Norman personality had convinced itself that his mother was not dead, so it had no knowledge of "her" crimes. The last scenes shows Bates totally taken over by his "mother" {a double exposure shows Norman's face superimposed by that of Mrs. Bates dead face} while Marion's car is being salvaged.

Psycho is often seen as a turning point in film history, representing the shift from Classical to the more experimental "Post-Classical" film. Psycho's unconventional storytelling and stylized photography and editing show the influence of the French New Wave and the European art films that Hitchcock admired.

In his novel, Bloch used an uncommon plot structure: he repeatedly introduced sympathetic protagonists, then killed them off. This played on his reader's expectations of traditional plots, leaving them uncertain and anxious. Hitchcock recognized the effect this approach could have on audiences, and utilized it masterfully in his adaptation

The most original and influential moment in the film is the "shower scene", which became iconic in pop culture because it was one of the most terrifying scenes ever filmed. Part of its effect was due to the use of startling editing techniques borrowed from the Soviet Montage filmmakers, and to Bernard Herrmann's bizarre but effective musical score.

Psycho is an example of the types of film that appeared in the 1960s after the erosion of the Production Code. It was unprecedented in its depiction of sexuality and violence (in addition, it was the first film ever to depict a flushing toilet onscreen). Its box office success helped propel Hollywood toward more graphic displays of previously censored themes.

Psycho is often considered to be the first of the slasher movie genre.

In the advertising campaign in its original run, Hitchcock told movie theater owners not to allow seating after the movie began. This was so the surprises of the film would remain surprises. Previously, people entered the movie theater whenever they showed up and left whenever they wanted; after Psycho, movie theaters quickly began adopting a policy of setting specific times for showing films and (generally) not letting people in afterwards.

Retrieved from "https://movies.fandom.com/wiki/Psycho?oldid=120910"
Community content is available under CC-BY-SA unless otherwise noted.