Start a Wiki
watch 01:18
The Loop (Movies)
Do you like this video?
Pumpkinhead 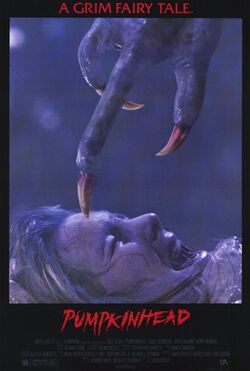 Pumpkinhead is a 1988 American supernatural horror film. It was the directorial debut of special effects artist Stan Winston. While Pumpkinhead received mixed reviews, the film has built up a cult following in the years since its release.

A man conjures up a gigantic vengeance demon called Pumpkinhead to destroy the teenagers who accidentally killed his son.

The film was given a limited release theatrically in the United States by United Artists in October 1988 and again in January 1989. In total, it grossed $4,385,516 total at the domestic box office.

The film was released on VHS in the U.S. by MGM/UA Home Entertainment in May 1989. MGM released the film on DVD twice; once in 2000 as a standard edition and again in 2008 in a 20th Anniversary Edition featuring an audio commentary and over an hour of featurettes.

Rotten Tomatoes, a review aggregator, reports that 56% of 16 surveyed critics gave the film a positive review; the average rating was 5.3/10. Dave Kehr of the Chicago Tribune wrote, "As a technician, Winston clearly knows how to make a monster, but as a director he`s yet to learn how to bring one to life." Richard Harrington of The Washington Post wrote that the film has poor writing and acting, but it is surprisingly polished for a B movie. Chris Willman of the Los Angeles Times wrote that, despite its poor writing, the premise is interesting, but it's not executed as well as Forbidden Planet.

Bloody Disgusting rated the film 4/5 stars and called it "a gothic story of love, loss, vengeance, and redemption." Joshua Siebalt of Dread Central rated the film 4/5 stars and wrote that film "stands as a timeless, dark fairy tale." Reviewing the 2000 DVD release, G. Noel Gross of DVD Talk rated it 3.5/5 stars and wrote that the film is "too good to pass over", despite its lackluster presentation. Nick Nunziata also criticized the 2000 DVD release and wrote that the film does not hold up. Nick Schager of The A.V. Club called it an endearing, pulp film that lacks subtlety.

Despite its poor box office results, Pumpkinhead has become a cult film.

Retrieved from "https://movies.fandom.com/wiki/Pumpkinhead?oldid=119678"
Community content is available under CC-BY-SA unless otherwise noted.