Start a Wiki
Puppet Wars was originally meant to be the trilogy where André Toulon and his creations would battle the Mummy, Frankenstein and Dracula, with Guy Rolfe set to return as Toulon and Turhan Bay being considered for the part of a mysterious Egyptian. Funding fell through at the last minute, but not before second unit footage was shot of an old–fashioned steam train in Romania, footage that was eventually used in Retro Puppet Master.

Three unmade movies written by Jay Woelfel that Charles Band was planning to make during the mid 1990's but stopped production on them when Paramount stopped sending funds to Full Moon. 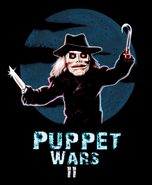 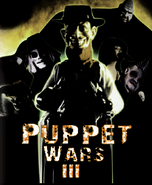 Add a photo to this gallery
Retrieved from "https://movies.fandom.com/wiki/Puppet_Wars?oldid=111406"
Community content is available under CC-BY-SA unless otherwise noted.