View src
watch 02:24
Wiki Targeted (Entertainment)
Do you like this video?
Play Sound
Quantum of Solace 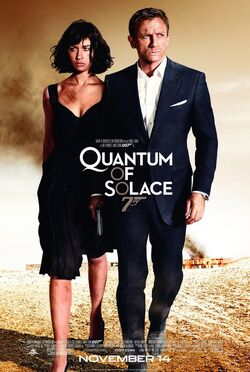 It serves as the twenty-second installment in the James Bond 007 series, and the second to star Craig as Bond.

Even if he struggles not to make his last mission a personal matter, James Bond is determined to hunt down those who forced Vesper to betray him. By questioning Mr White, 007 and M learn that the organization to which he belongs is much more complex and dangerous than anything they had imagined.

Bond crosses the road of the beautiful and pugnacious Camille, who seeks revenge too. She leads him on the trail of Dominic Greene, a ruthless businessman and one of the pillars of the mysterious organization. During a mission to Austria, Italy and South America, Bond discovers that Greene is maneuvering to take control of one of the most important natural resources in the world using the power of the organization and by manipulating the CIA and the British government.

Taken in a labyrinth of treachery and murder, as he approaches the true leader of Vesper's betrayal, 007 must absolutely stay ahead of the CIA, the terrorists and even on M, to thwart Greene's sinister plan and stop the organization.

Quantum of Solace received mixed to positive reviews from critics. On Rotten Tomatoes, The film has a score of 65% based on 294 reviews with an average score of 6.16/10.