Start a Wiki
Queen of Katwe 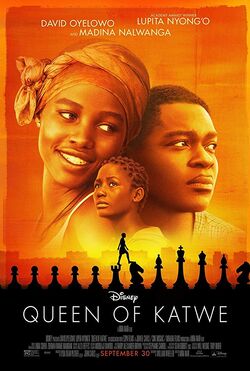 Queen of Katwe (2016) is a biographical drama directed by Mira Nair from a screenplay by William Wheeler. The film is about the life of Phiona Mutesi, an Ugandan chess prodigy who becomes a Woman Candidate Master after her performances at World Chess Olympiads. The film will be produced by Walt Disney Pictures and ESPN Films, and will be released at an unspecified date in 2016.

A young girl from Uganda trains to become a world chess champion.[1]

Queen of Katwe - Official Trailer
Add a photo to this gallery

Retrieved from "https://movies.fandom.com/wiki/Queen_of_Katwe?oldid=162161"
Community content is available under CC-BY-SA unless otherwise noted.