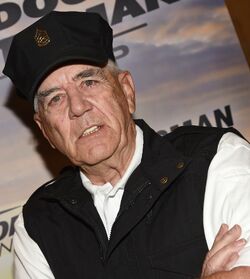 Ermey has often been typecast for the roles of authority figures, such as his breakout performance as Gunnery Sergeant Hartman in Full Metal Jacket, Mayor Tilman in the Alan Parker film Mississippi Burning, Bill Bowerman in Prefontaine, Sheriff Hoyt in The Texas Chainsaw Massacre remake, and plastic army men leader Sarge in the Toy Story films.

Ermey was born Ronald Lee Ermey on March 24, 1944 in Emporia, Kansas. His father was John Edward and his mother was Betty Ermey (née Pantley). He was of German, English, Scottish, Dutch, French, Swiss, and Welsh descent. Ermey had five brothers and grew up at a farm outisde Kansas City, Kansas.

In 1958, when he was 14 years old, Ermey moved to Zillah, Washington along with his family. When Ermey was 17 in 1961, he often got trouble with local authorities, and was arrested twice for criminal mischief. After his second arrest, a judge gave him a choice between being sent to jail or joining the military. As a result, Ermey chose the military.

Ermey then served in Marine Wing Support Group 17 at Marine Corps Air Station Futenma in Okinawa, Japan. In 1968, he was ordered to South Vietnam with MWSG-17, and spent 14 months in country. The remainder of his service was on Okinawa, where he was advanced to staff sergeant (E-6). He was medically retired in 1972 because of several injuries. On May 17, 2002, he received an honorary promotion to gunnery sergeant (E-7) by the Commandant of the Marine Corps, General James L. Jones.

On the morning of April 15, 2018, Ermey passed away from complications related to pneumonia at a hospital in Santa Monica, California. He died at the age of 74.

Retrieved from "https://movies.fandom.com/wiki/R._Lee_Ermey?oldid=176687"
Community content is available under CC-BY-SA unless otherwise noted.