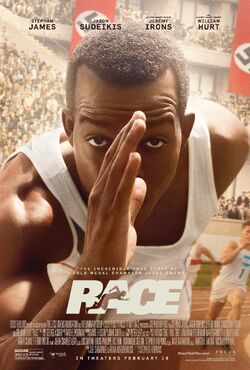 Race is a 2016 Canadian-French-German-British biographical sports-drama. It is the first feature biopic film about African American athlete Jesse Owens, winner of a record-breaking four gold medals at the 1936 Olympic Games hosted by Nazi Germany in Berlin. Directed by Stephen Hopkins and written by Joe Shrapnel and Anna Waterhouse, the film stars Stephan James, Jason Sudeikis, Jeremy Irons, William Hurt and Carice van Houten. It was released in the United States on February 19, 2016.

Based on the incredible true story of Jesse Owens, the legendary athletic superstar whose quest to become the greatest track and field athlete in history thrusts him onto the world stage of the 1936 Olympics, where he faces off against Adolf Hitler's vision of Aryan supremacy. "Race" is an enthralling film about courage, determination, tolerance, and friendship, and an inspiring drama about one man's fight to become an Olympic legend. 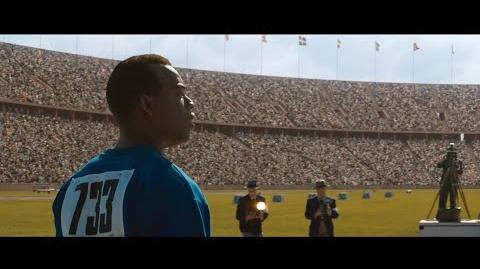 Retrieved from "https://movies.fandom.com/wiki/Race_(2016)?oldid=120700"
Community content is available under CC-BY-SA unless otherwise noted.