Start a Wiki
watch 01:16
The Loop (Movies)
Do you like this video?
Raging Bull 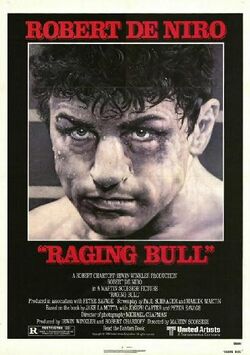 Directed By
Martin Scorsese
Produced By

Raging Bull is a 1980 American biographical sports drama film directed by Martin Scorsese, and adapted by Paul Schrader and Mardik Martin from Jake LaMotta's memoir Raging Bull: My Story. It stars Robert De Niro as Jake LaMotta, an Italian American middleweight boxer whose sadomasochistic rage, sexual jealousy, and animalistic appetite destroyed his relationship with his wife and family. Also featured in the film are Joe Pesci as Joey, La Motta's well-intentioned brother and manager who tries to help Jake battle his inner demons; and Cathy Moriarty as his abused wife. The film features supporting roles from Nicholas Colasanto, Theresa Saldana, and Frank Vincent.

In 1964, an aging, overweight Italian American Jake LaMotta (Robert De Niro) practices a comedy routine. A flashback to 1941 shows his first loss in a major boxing match, against Jimmy Reeves. Jake's brother Joey LaMotta (Joe Pesci) later discusses a potential shot for the middleweight title with one of his Mafia connections, Salvy Batts (Frank Vincent). Some time thereafter, Jake spots a 15-year-old girl named Vickie (Cathy Moriarty) at an open-air swimming pool in his Bronx neighborhood. He eventually pursues a relationship with her, even though he is already married. Jake defeats Sugar Ray Robinson once in 1943 and has another win three weeks later. Despite the fact that Jake dominated Robinson during the bout, the judges surprisingly rule in favor of Robinson and Joey feels he won only because he was enlisting into the US Army the following week. Jake is married to Vickie by 1947.

As Jake's fears grow about Vickie having feelings for other men, particularly Tony Janiro, the opponent for his forthcoming fight, he shows off his sexual jealousy when he defeats Janiro in front of the local Mob boss, Tommy Como (Nicholas Colasanto) and Vickie. As Joey discusses the victory with journalists at the Copacabana, he is distracted by seeing Vickie approach a table with Salvy and his crew. Joey speaks with Vickie, who says she is giving up on his brother. Blaming Salvy, Joey viciously attacks him in a fight that spills outside of the club. Como later orders them to apologize, and has Joey tell Jake that if he wants a chance at the championship title, which he has control over, he will have to take a dive first. In a match against Billy Fox, Jake does not even bother to put up a fight. He is suspended shortly thereafter from the board on suspicion of throwing the fight, though he realizes the error of his judgment when it is too late. Despite the suspension, he eventually wins the middleweight championship title against Marcel Cerdan in 1949.

A year later, Jake asks Joey if he fought with Salvy at the Copacabana because of Vickie. Jake then asks if Joey had an affair with her; Joey refuses to answer, insults Jake, and decides to leave. Jake directly asks Vickie about the affair and she sarcastically states that she had sex with the entire neighborhood (including his brother, Salvy, and Tommy Como) after he breaks down the bathroom door where she briefly hides from him. Jake angrily walks to Joey's house and brutally beats him up in front of Vickie and Joey's wife and children. After defending his championship belt in a brutal fifteen round bout against Laurent Dauthuille in 1950, he makes a call to his brother after the fight, but when Joey assumes Salvy is on the other end and starts insulting and cursing at him, Jake says nothing and hangs up. Estranged from Joey, Jake's career begins to decline slowly and he eventually loses his title to Sugar Ray Robinson in their final encounter in 1951

By 1956, Jake and his family have moved to Miami. After staying out all night at his new nightclub there, Vickie tells him she wants a divorce (which she has been planning since his retirement). He is later arrested for introducing under-age girls (posing as 21-year-olds) to men and serves a jail sentence in 1957 after failing to raise enough bribe money by taking the jewels out of his championship belt instead of selling the belt itself. In his jail cell, Jake pounds the walls, sorrowfully questioning his misfortune and crying in despair. Upon returning to New York City in 1958, he happens upon his estranged brother Joey, who forgives him but is elusive. Going back to the beginning sequence, Jake refers to the "I coulda' have been a contender" scene from the 1954 movie On the Waterfront starring Marlon Brando complaining that his brother should have been there for him but is also keen enough to give himself some slack. After a stage hand informs him that the auditorium where he is about to perform is crowded, Jake starts to chant "I'm the boss" while shadowboxing.

The film ends with a Biblical quote.

Retrieved from "https://movies.fandom.com/wiki/Raging_Bull?oldid=102743"
Community content is available under CC-BY-SA unless otherwise noted.