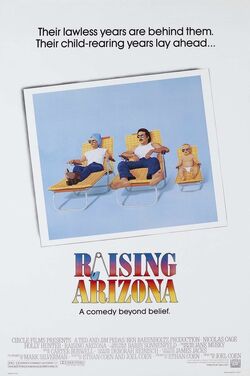 Arizona petty criminal Herbert "H.I." (known as "Hi") McDonnough and policewoman Edwina "Ed" McDonnough meet after she takes the mugshots of the recidivist Hi during his many trips through her station. They fall in love and get married, and Hi promises to reform.

They move into a desert mobile home, and Hi gets a job drilling sheet metal. After serious and ongoing attempts to have a baby, Ed discovers that she is infertile. The couple cannot adopt because of Hi's criminal record. The couple learns of "the Arizona Quints", sons of locally-famous unpainted furniture magnate Nathan Arizona; Hi and Ed decide to kidnap one of the five babies. After a nearly disastrous false start, Hi successfully abducts Nathan Junior (or so he thinks, no one is completely sure).

Hi and Ed return home, and are promptly visited by his inmate chums, Gale Snoats and his brother Evelle, who have just tunneled out of prison. Under the two brothers' influence, Hi threatens to revert to his felonious ways, leading him to believe that Ed and he are not well suited for each other. Their problems are only worsened when Hi's supervisor, Glen, proposes a wife swap and Hi assaults him.

Now out of a job, Hi steals diapers and cash from a convenience store and is sucked into a wild chase around the local neighborhood with the police, a gun-toting store cashier, and a pack of dogs. Ed drives off without Hi, but finally relents and picks him up, leading to a tense ride home.

Back at the McDonnough residence, Glen stops by and reveals that he has deduced "Junior's" true identity and gives Hi an ultimatum: give up the baby to be raised by Glen and his wife, Dot, or Glen will turn them in for the reward.

Gale and Evelle overhear this conversation and immediately decide to betray Hi and take Junior themselves for the large reward. Gale and Hi's ensuing fight wrecks the mobile home's interior before Hi is subdued and tied up. Gale and Evelle leave to rob a "hayseed" bank with Junior in tow. When Ed comes home, she finds the battered and bound Hi and learns that the baby is gone. Despite their disintegrating relationship, Ed and Hi arm themselves and set out to retrieve their child together.

While the previous events were taking place, Nathan Arizona Sr. was approached by the menacing and heavily armed biker/bounty hunter Leonard Smalls, who offers to find the child for twice the publicly-posted reward. Even though he considers police efforts to locate his son totally inadequate, Nathan Sr. refuses to partake of Smalls' services. Smalls decides to recover the child anyway and sell him on the black market, as was done to himself when he was a baby. He begins tracking Gale and Evelle, using the scent of the brothers' hair pomade. He breaks into the deserted McDonnough mobile home, and finds a newspaper clipping concerning the targeted bank.

Gale and Evelle successfully rob the bank, but end up leaving Junior behind in the road in his car seat. Their miseries are compounded when one of the bank's anti-theft dye canisters explodes in their loot sack, coating them and the interior of their car in blue dye. Back at the bank, Smalls arrives and beats Ed and Hi to Junior, mounting Junior's car seat on the front of his motorcycle, and turns around to fight the couple. Ed grabs the baby and flees; Hi is able to fend Smalls off for a short time, but then the biker begins to methodically brutalize him. After throwing Hi to the ground and drawing his matched pair of shotguns to finish the job, Hi holds up his hand to reveal that he has pulled the pin from one of the many working hand grenades which dangle from Smalls' jacket. Smalls struggles unsuccessfully to drop the guns and get rid of the grenade before being blown to pieces. One of these items is a set of bronzed baby shoes; as they lie amidst the rest of the flaming debris, the viewer can hear the cries of an infant.

Hi and Ed wearily sneak Nathan Jr. back into his home. As they are putting him back in his crib, Nathan Sr. confronts them, learns why they took his son, and is uncharacteristically understanding of their predicament. When they say that they are breaking up, he advises them to not act rashly; perhaps someday, medical science will catch up with them, just as it did with him and his own beloved wife (with a vengeance). Hi and Ed go to sleep in the same bed, and Hi dreams: Gale and Evelle elect to return to prison, Nathan Jr. is a football star for Arizona State, Glen gets what's coming to him, and maybe, just maybe, Hi and Ed will remain married for many years to come, have lots of children, and live together in a better place (perhaps Utah).

The police station scenes were filmed at the Tempe, Arizona police station on 5th Street next to Sun Devil Stadium on the Arizona State University campus, while the family picnic where H.I. punches Glen was filmed at the Lost Dutchman State Park in Apache Junction, Arizona.

The baby on the movie's international poster is Max Bemis, lead singer of the punk rock group Say Anything. His father designed the poster and used him as a model.

In several scenes, including when H.I. meets with the parole board, a portrait of Barry Goldwater is visible in the background. Goldwater ran for President in 1964 as a Republican and was a U.S. Senator from Arizona for many years. He is considered one of the most famous people in Arizona history. Goldwater was famously supported by Ronald Reagan; he at one point criticized Reagan's economic plan. On the front bumper of the car Gale and Evelle use during the bank robbery there is a Mondale-Ferrarro sticker, the Democrats who ran against Reagan in 1984.

After Evelle and Gale break out of prison, they clean up in a gas station restroom where "P.O.E." and "O.P.E." are spraypainted on the walls, a reference to the film Dr. Strangelove, where it stood for both "Peace on Earth" and "Purity of Essence".

Leonard Smalls shares the name of Lennie Smalls, from John Steinbeck's novella Of Mice and Men. Both are physically powerful men who damage things smaller and weaker than themselves, though only Leonard does so intentionally. Lennie wants to take care of rabbits, while Leonard kills one with a grenade.

The text of the second-to-last screen of credits, which shows acknowledgment of several Southwestern U.S. Native American tribes, is arranged in the shape of a large clay pottery jar, a craft piece historically made by such tribes.

When Hi goes to work in a factory, his chatty co-worker (a cameo by M. Emmet Walsh) can be seen wearing a jumpsuit with the label, "Hudsucker Industries". The company name derived from a script written by the Coen brothers a couple of years earlier in collaboration with Sam Raimi, The Hudsucker Proxy, which the Coens had put on the back burner because they knew they wouldn't be able to raise the budget to make it properly. The script would eventually be filmed by the Coens and released in 1994. The idea of tracking a fugitive by the scent of his hair-pomade is reused in the Coens' 2000 film O Brother, Where Art Thou?

A Simpsons episode from season 18 makes a parody of the diaper chase scene.

There are three scenes of H.I. and Smalls that imply they are alike:

Smalls may be a symbol of H.I.'s own evil and bad attributes, but some believe the relationship to be one of Smalls being the father that abandoned H.I. Smalls also has a tattoo reading, "Mama Didn't Love Me."

Retrieved from "https://movies.fandom.com/wiki/Raising_Arizona?oldid=145303"
Community content is available under CC-BY-SA unless otherwise noted.