View src
watch 01:33
House of the Dragon Trailer - The Loop
Do you like this video?
Play Sound
Ralph Fiennes 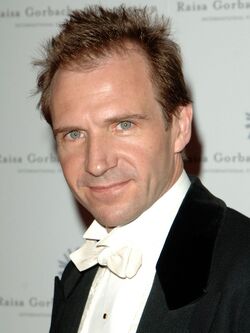 Ralph Fiennes (pronounced Raif Fines) is an English theatre and film actor. A noted Shakespeare interpreter, he first achieved success onstage in the Royal National Theatre. Since then, he has portrayed characters such as Count Almásy in The English Patient, Nazi war criminal Amon Goeth in Schindler's List, Victor Quartermine in Wallace and Gromit: The Curse of the Were-Rabbit and Charles Van Doren in Quiz Show. He also starred in The Constant Gardener, Strange Days, Red Dragon, Onegin, and The End of the Affair, among others.

He is well known for playing Lord Voldemort in the Harry Potter movies.

Fiennes trained at the Royal Academy of Dramatic Arts and then joined the Royal Shakespeare Company in 1988. He is the only actor ever to have won a Tony Award for playing Hamlet on Broadway. In 2001, Fiennes received the William Shakespeare Award from the Shakespeare Theatre in Washington, D.C.

Fiennes made his film debut in 1992 as Heathcliff in Wuthering Heights opposite Juliette Binoche, for which he received substantial acclaim and praise throughout Europe. But it was in the following year that he became known internationally, portraying the amoral Nazi concentration camp commandant Amon Göth in Steven Spielberg's Schindler's List, for which he was nominated for the Academy Award for Best Supporting Actor. He did not win the Oscar, but he did win the Best Supporting Actor BAFTA Award for the role.

In 1994, he portrayed American academic Charles Van Doren in Quiz Show, and in 1996, he was nominated for the Academy Award for Best Actor for the World War II epic romance The English Patient.

Fiennes' work has ranged from thrillers (Red Dragon, (Harry Potter) to animated Biblical epic (The Prince of Egyptt) to campy nostalgia (The Avengers ) to romantic comedy (Maid in Manhattan) and offbeat dramedy (Oscar and Lucinda). In 2002, Fiennes and Miranda Richardson received several awards for their performances in David Cronenberg's award-winning thriller Spider.[1]

The Constant Gardener was released in 2005, with Fiennes as the title role. The film is set in the slums of Kibera and Loiyangalani, Kenya. The situation affected the crew to the extent that they set up the Constant Gardener Trust in order to provide basic education around these villages. Fiennes is a patron of the charity.[2]

His recent performance in the play Faith Healer gained him a nomination for a 2006 Tony Award.

In 2008, Fiennes co-starred in the film In Bruges as a hitman boss. Brendan Gleeson, who plays Mad-Eye Moody, also was featured in the film along with Clemence Poesy, who acts as Fleur Delacour in the film adaptations of Harry Potter.

Fiennes also has a small role in 2010 film Nanny McPhee and the Big Bang, which starred Emma Thompson as the title character. Maggie Smith also had a supporting role in the film. He recently played Hades, God of the underworld, in the 2010 epic Clash of the Titans, and he is also signed to appear in Skyfall, the 23rd James Bond film.

In 2011 Fiennes made his directorial debut with a modern-day adaptation of William Shakespeare's Coriolanus, in which he also played the title role.

Born in 1962 in Suffolk, England to photographer Mark Fiennes and novelist Jennifer Lash, Fiennes is a third cousin of the adventurer Sir Ranulph Fiennes.

The eldest of six children, he was raised a Roman Catholic. The actor Joseph Fiennes (Shakespeare in Love, Luther (film)) is his brother. His sister Martha Fiennes works as a director (in her film Onegin, he acted the title role). His brother Magnus Fiennes is a composer. His other sister, Sophie Fiennes is also a filmmaker. His other brother, Jacob Fiennes, is a conservationist. Fiennes is a UNICEF ambassador.[3]

The Fiennes family moved to Ireland in 1973, living in West Cork and County Kilkenny for some years, where Fiennes attended St Kieran's College for one year and Newtown, a Quaker school in Waterford city. They then moved to Salisbury in England where Fiennes finished his schooling at Bishop Wordsworth's School before attending Chelsea College of Art.[citation needed]

He married actress Alex Kingston (Elizabeth Corday from ER) in 1993, but they divorced in 1997.[4] In 1995, Fiennes started dating Francesca Annis, his much-older (18 years) co-star in Hamlet. In February 2006, the couple separated. This came after tabloid reports that said Fiennes had an affair with Romanian singer Cornelia Crisan.[5]

In late 2006, sources reported that Fiennes is dating American actress Ellen Barkin, who is eight years his senior.[6]

On February 11, 2007, Lisa Robertson, a Qantas flight attendant was suspended and subsequently fired from both Qantas and a Sydney brothel after having sex with Fiennes in a business class toilet during a flight from Darwin to Mumbai on January 24, 2007 while on duty.[7] Robertson admitted to the encounter in an interview with the Daily Mail. She used to be an undercover policewoman.[8] Fiennes has not denied the incident took place but his spokesperson said on his behalf he claimed he was not the "aggressor" in the relationship. Because the story was not widely reported, the controversy was only minor.[9]

has 0 images related to Ralph Fiennes.