Start a Wiki
watch 16:45
The Loop (Movies)
Do you like this video?
Rango 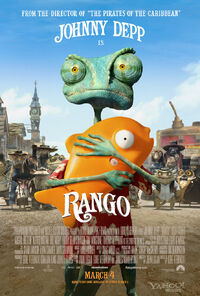 Rango is a 2011 animated adventure comedy film starring Johnny Depp as a lizard named Rango, who is the sheriff of a western town.

A pet chameleon (Johnny Depp) becomes accidentally stranded in the Mojave Desert after his terrarium falls from his owner's car. After meeting an armadillo named Roadkill (Alfred Molina), who is seeking the mystical Spirit of the West, he narrowly avoids being eaten by a red-tailed hawk. The next day, after having a surreal nightmare, he meets desert iguana Beans (Isla Fisher), a rancher's daughter, who takes him to Dirt, an Old West town populated by desert animals.

Beans discovers that the water reserves, stored in a water-cooler bottle in the bank, are dangerously low. At the Gas Can Saloon, the chameleon, using bravado and improvisation to fit in, presents himself as Rango (after taking his name from the last part of the word Durango), a tough drifter. He quickly runs afoul of outlaw Bad Bill (Ray Winstone), narrowly avoiding a shootout when the hawk returns, scaring Bill. The hawk chases Rango until by luck Rango kills the predator by crushing it under an empty water tower that he accidentally caused to collapse. In response, the Mayor (Ned Beatty) appoints Rango the new sheriff. A skeptical Beans demands Rango investigate the water problem while the townsfolk worry that the hawk was the only thing keeping gunslinger Rattlesnake Jake from returning to terrorize them.

That night, Rango inadvertently gives some mole and prairie dog robbers the location of the bank and tools to break into the vault. When the townsfolk find their water stolen, Rango organizes a posse that finds the bank manager, Mr. Merrimack (Stephen Root), dead from being drowned. They eventually track the robbers to their mountain hideout, only for their leader, Balthazar (Harry Dean Stanton), to reveal that his clan of moles, prairie dogs and other such subterranean animals greatly outnumbers the posse. Nabbing the covered wagon water-bottle, the posse flees, chased in a ground and air fight before discovering the bottle is empty. Despite the robbers professing that they'd discovered it empty, the posse returns them to town for trial.

After Rango and Beans deduce that the Mayor has been buying all the nearby land around, Rango recalls the mayor telling him how controlling water equals control of everything. He confronts the mayor, who denies he has done anything wrong and shows Rango that he is building a modern city on the old land. With no proof of the mayor's wrongdoing, Rango leaves, while the mayor, seeing that Rango is close to figuring out what his true plans are, orders Bad Bill to call Rattlesnake Jake (Bill Nighy), who soon arrives, firing shots with his gatling gun tail. Recognizing that Rango is a fake, Jake runs him out of town after humiliating him and making him admit that everything he told the town about himself is a lie.

Ashamed and no longer knowing who he is, Rango wanders the desert and, in a daze, meets the Spirit of the West (Timothy Olyphant), a cowboy whom Rango calls the Man with No Name. The Spirit inspires Rango and tells him, "No man can walk out on his own story". With the aid of Roadkill and mystical moving yuccas, Rango learns the source of Dirt's water is Las Vegas and that someone has shut off a water line. Realizing the mayor's hand in this, Rango recruits the hill clan in his plan.

Returning to town, he calls out Jake for a duel with a single bullet — a diversion so that the hill folk and the yucca can flood the town with water. The mayor threatens Beans' life, forcing Rango to surrender. Locked in the glass-bottle bank vault to drown, the mayor tries to shoot Jake with Rango's gun, only to discover it is empty. Inside the bottle, Beans kisses Rango but chokes on the bullet, which he had hidden in his mouth. When he performs the Heimlich Maneuver on her, she spits it out with enough force to crack the glass and shatter the vault. Acknowledging Rango as a worthy opponent, Jake grabs the mayor and drags him into the desert to take revenge. The citizens of Dirt celebrate the return of the water and recognize Rango as their hero.

Retrieved from "https://movies.fandom.com/wiki/Rango?oldid=224814"
Community content is available under CC-BY-SA unless otherwise noted.