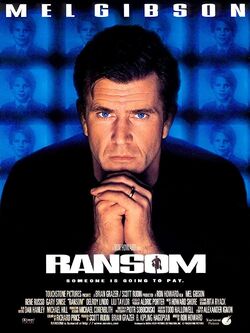 While multi-millionaire Tom Mullen and his wife Kate attend a science fair, their son Sean is kidnapped. Sean is taken to an apartment by Maris, a caterer for the Mullens, along with criminals Clark, Cubby and Miles, and Detective Jimmy Shaker, Maris' boyfriend and the mastermind behind the kidnapping. Tom and Kate receive an e-mail from the kidnappers demanding $2,000,000. Tom calls the FBI, who begin operating from his New York City penthouse under Special Agent Lonnie Hawkins. In private, Tom voices his belief that a union machinist, Jackie Brown, who is in prison following one of Mullen's business scandals, may have been behind it. They visit Brown in prison, but he angrily denies any involvement with the kidnapping.

Tom agrees to the FBI's instructions for delivering the ransom. Receiving a phone call from Shaker, who is electronically disguising his voice, Tom follows his instructions. He meets Cubby in a New Jersey quarry but refuses to hand the money over when Cubby fails to give him the directions Shaker had promised him. A fight ensues and the FBI intervene and shoot Cubby. He dies before he can reveal Sean's location. Shaker later arranges another drop off. While Tom initially agrees to take the money alone, he realizes there is no guarantee Sean will be returned alive and instead appears on television to offer the ransom as a bounty on the kidnappers' heads, promising to withdraw the bounty and drop all charges if the kidnappers return his son alive and unharmed.

Despite the pleadings of Kate and FBI Special Agent Lonnie Hawkins, Tom sticks to his plan, believing it is the best chance of having Sean returned. Shaker lures Kate to a meeting where he tells her to pay the ransom or Sean will die before ditching Sean's blood stained t-shirt. Tom responds by increasing the bounty to $4,000,000. Shaker calls Tom and demands to be paid, but Tom still refuses, and Shaker fires a gunshot after Tom hears Sean scream for help, leading Tom and Kate to believe their son is dead. Clark and Miles attempt to abandon the plan and flee, but Shaker calls in the NYPD to request backup and kills both of his men while making it look like Miles shot first, and kills Maris after she shoots him in the arm from behind. The NYPD arrive and find Shaker with Sean, believing Shaker found and rescued the boy. Hawkins informs Tom and Kate and they are reunited with their son while Shaker is hospitalized. Tom also recognizes Maris.

Shaker later pays Tom a visit to claim the reward and leave the country before investigators discover his connection with Maris. Sean, however, eavesdrops on the meeting and recognizes Shaker as the kidnapper after hearing his voice. Tom notices his son has wet his pants after hearing Shaker's voice, and starts to realize this as well; his suspicions are then confirmed when Shaker uses a phrase the kidnapper used. Shaker quickly realizes that Tom is onto him, and, though his initial plan is to kill everyone in the mansion, Tom persuades him to accompany him to the bank to gain the money and leave peacefully. On the way, however, Tom discreetly alerts Hawkins and the police and FBI converge on Tom and Shaker outside the bank.

As soon as Tom and Shaker exit the bank, two officers (who greeted Shaker and Tom before entering the bank) inform Shaker that he is going to be detained, causing Shaker to shoot them down before Tom knocks him to the ground after which a chase ensues in which Tom and Shaker grapple furiously before falling through a shop window, severely injuring both and impaling Shaker through the neck. Tom picks up a hidden pistol (that Shaker pulled out during the scuffle) and aims at Shaker before Hawkins and other police officers keep demanding that he drop the gun and walk away. Just as Tom begins to comply, Shaker, in desperation, draws another hidden gun, but is shot dead by Tom and Hawkins. Tom then finally drops the gun and police rush in to arrest him, but Hawkins tells them to hold off, allowing Tom and Kate to leave the scene.

During filming, Mel Gibson had appendicitis and had to have an operation.

The movie has a 75% rating from Rotten Tomatoes based on 69 reviews. Audiences polled by CinemaScore gave the film an average grade of "A−" on an A+ to F scale.

Critic Roger Ebert gave the film three stars out of four and wrote, "Gibson gives an interesting performance, showing a man trying to think his way out of a crisis, and Sinise makes a good foil: Here are two smart men playing a game with deadly stakes."

Retrieved from "https://movies.fandom.com/wiki/Ransom_(1996)?oldid=147353"
Community content is available under CC-BY-SA unless otherwise noted.