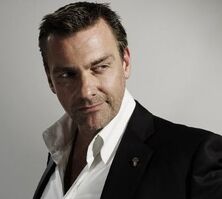 A tall, dark, but somewhat gentle-looking actor Ray Stevenson was born in Lisburn, Northern Ireland on 25 May 1964. He is a film, TV and stage actor. He moved with his family to Lemington, Newcastle upon Tyne, England in 1972 at the age of eight, and later to Cramlington, Northumberland, where he was raised. The second of three sons of a Royal Air Force pilot father and an Irish mother, As a child he dreamed to become an actor, but he also thought that dream was impossible. So he pursued his other love, art, and went to art school instead. He was an interior designer with an architectural firm in London when he at 25 decided to try out acting. Eventually he attended Bristol Old Vic Theatre School, graduating at the age of 29.

Stevenson has starred in several feature films, primarily in supporting roles. He made his debut in The Theory of Flight (1998) with Kenneth Branagh and Helena Bonham Carter, where he played the part of a gigolo hired to help Bonham Carter's character to lose her virginity. In 2004, Stevenson starred alongside Clive Owen and Keira Knightley in King Arthur. He portrayed Dagonet, a knight of the round table who sacrifices his life for his comrades.

In 2011, Stevenson appeared in the film Kill the Irishman, based on the book To Kill the Irishman, as Danny Greene, an Irish American mobster who took on the Italian mob in Cleveland in the 70's. He worked with Kenneth Branagh again, this time as a director, in the adaptation of Marvel Comics' Thor, starring in the role of Volstagg, one of Thor's trusted comrades. Also that year, he played Porthos in Paul W. S. Anderson's adaptation of The Three Musketeers. On July 8, 2011, Stevenson was cast as Firefly for G.I. Joe: Retaliation. Stevenson is said to be in consideration to play The Kurgan in the remake of Highlander.

He is perhaps best known for playing the character of legionary Titus Pullo in the BBC/HBO television series Rome. He shared the lead starring role in the series with Kevin McKidd. His portrayal of Pullo's fierce and loyal character and the character's development and adaptation to the changing circumstances of life and history has won both critical and public acclaim. He is now portraying the character Isaac Sirko in the award winning TV series, Dexter.