watch 03:27
Wiki Targeted (Entertainment)
Do you like this video?
Play Sound
Ready Player One 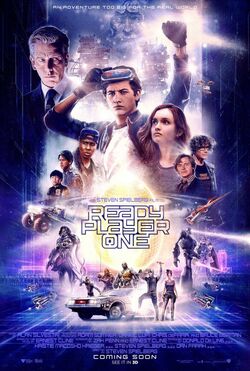 Ready Player One is a film adaptation of the Ernest Cline novel of the same name. The screenplay was adapted by Cline himself, with help from Zak Penn (The Incredible Hulk, The Avengers, X-Men 2, X-Men: The Last Stand) and Eric Eason (A Better Life, Manito, Journey to the End of the Night). In March 2015, Steven Spielberg signed on to direct.

(From Ready Player One Wiki)
The year is 2045 and the world is in near-ruins. The Great Recession has taken its toll on the world's economy, and resources are scarce. The Internet and gaming culture have evolved into a creation known as OASIS, a massive multiplayer online simulation game created by James Halliday and Ogden Morrow of Gregarious Simulation Systems (GSS), formerly known as Gregarious Games. Halliday, with no heirs or other living family, dies suddenly and leaves a video will to those in OASIS and a book that was dubbed Anorak's Almanac, which purports to be a volume written by James Halliday's avatar Anorak in OASIS. The video says that whoever can collect three keys (Copper, Jade, and Crystal) that are hidden throughout the universe of OASIS and pass through the matching gates will receive his fortune and controlling stake in GSS. This becomes known as the Hunt and people immediately begin the search for Halliday's Easter Egg. Those searching for the Egg are referred to as "gunters," a truncation of "egg hunters." Gunters devote an enormous amount of time to studying 1980s pop culture, the decade Halliday grew up in and was perpetually obsessed with, in the hope it will assist them with locating and solving the puzzles involved with the Egg.[1]

Retrieved from "https://movies.fandom.com/wiki/Ready_Player_One?oldid=298102"
Community content is available under CC-BY-SA unless otherwise noted.