Start a Wiki
watch 01:27
The Loop (Movies)
Do you like this video?
Ready or Not 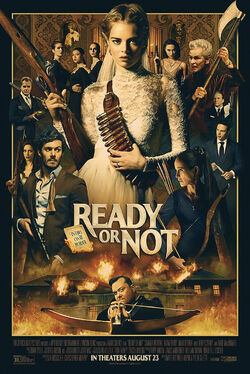 The wealthy Le Domas family hosts a generations-long tradition of playing a game on the wedding night of the newest members to the family. This year, Alex is marrying a woman named Grace, and the game she ends up picking is Hide and Seek. What Alex failed to mention is his great-great-grandfather made a deal with a benefactor named Mr. Le Bail (who is all but outright stated to be the devil), and the family must deliver a sacrifice before dawn to save their lives. Grace only discovers this after a maid is shot by Alex's drug-addicted sister Emilie. Alex promises to help Grace get out.

Once the family realizes that Grace knows the truth, they try to capture her, while Alex tries to help her escape. Two more maids are killed before the family's butler, Stevens, makes his own move to capture Grace. She almost succeeds in killing him once she gets out of the mansion, but Stevens catches her and tries to bring her back. Grace ends up causing Stevens to crash his car and kill himself, but she is found by Alex's brother Daniel, and recaptured.

As the family prepares to sacrifice Grace, it is revealed that Daniel poisoned his family to give Grace a chance to escape. Unfortunately, he is shot by his greedy wife Charity for letting Grace go. Alex's father Tony tries to capture Grace, only to get knocked out with a lantern that starts a fire. Alex's mother Becky tries to kill Grace herself, but Grace beats her to death. Alex witnesses this, and after realizing Grace won't stay with him now, he turns her over to his family.

The ritual resumes, but Grace manages to break herself free from the family's grip. The sun rises, meaning the family has failed to hold up their end of the bargain. Just when it looks like the curse may not have been real after all, Helene attempts to violate the rules and murder Grace after the game had concluded, and every member of the family starts violently exploding into bloody messes. A weasely Alex then tries to beg for Grace's forgiveness, and when she requests a divorce, he also explodes. As the house burns down, Grace briefly sees the spirit of Mr. Le Bail, who appears to approve of her survival. She gets out and is found by police.

READY OR NOT Red Band Trailer HD FOX Searchlight
Add a photo to this gallery
Retrieved from "https://movies.fandom.com/wiki/Ready_or_Not?oldid=195363"
Community content is available under CC-BY-SA unless otherwise noted.