watch 00:59
The Loop (Movies)
Do you like this video?
Reality Bites 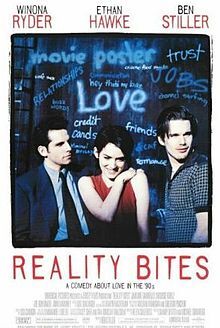 Reality Bites is a 1994 romantic comedy-drama film written by Helen Childress and directed by Ben Stiller. It stars Winona Ryder, Ethan Hawke and Stiller, with supporting roles by Janeane Garofalo and Steve Zahn. The plot follows Lelaina (Ryder), an aspiring videographer working on a documentary called Reality Bites about the disenfranchised lives of her friends and roommates. Their challenges exemplify some of the career and lifestyle choices faced by Generation X. The film was well-received critically and commercially.

Four friends who recently graduated from college live together in Houston, Texas. Coffee-house guitarist Troy Dyer and budding filmmaker Lelaina Pierce are attracted to each other, although they have not acted on their feelings save for one brief, drunken encounter. Troy is floundering, having lost several minimum wage jobs—the last of which he loses early in the film for stealing a candy bar from his employer. Lelaina was valedictorian of her university, and has aspirations to become a documentarian, although initially having to settle for a position as production assistant to a rude and obnoxious TV host.

Lelaina meets Michael Grates when she throws a cigarette into his convertible, causing him to crash into her car. The two soon begin to date. He works at an MTV-like cable channel called "In Your Face" as an executive, and after learning about a documentary she's been working on, wants to get it aired on his network.

Lelaina's roommate Vickie has a series of one-night stands and short relationships with dozens of guys; her promiscuity leads her to confront a very-real risk of contracting HIV after a former fling tests positive for the virus. Vickie works as a sales associate for The Gap, and is later promoted to manager and seems content with her new job. Her friend Sammy Gray is gay; he remains celibate, not because of a fear of AIDS, but because forming a relationship would force him to come out to his conservative parents.

After an impulsive act of retribution, Lelaina loses her job, which causes some tension with her roommates. Eventually, Vickie's AIDS test comes back negative and Sammy comes out to his parents (and he even starts dating) and the two manage to resume their lives.

Meanwhile, Lelaina's relationship with Michael dissolves after he helps her sell the documentary to his network, only to let them edit it into a stylized montage that she feels compromises her artistic vision. Lelaina and Troy then sleep together and confess their love. The morning after, he avoids her, and after a messy confrontation, leaves town. After Troy's father dies, he forces himself to reevaluate his life, deciding to attempt a relationship with Lelaina.

Troy and Lelaina reunite and make amends after Troy returns from his father's funeral in Chicago. While we do not see what happens to Michael, during the credits there is an abrupt break where two characters, "Laina" and "Roy", who are obvious parodies of Lelaina and Troy, have an argument about their relationship. As the "show's" credits roll, Michael's name is revealed as the producer, implying that he has turned the failed relationship into the subject of a new show on his network.

Retrieved from "https://movies.fandom.com/wiki/Reality_Bites?oldid=110228"
Community content is available under CC-BY-SA unless otherwise noted.