Start a Wiki
watch 01:48
The Loop (Movies)
Do you like this video?
Rear Window 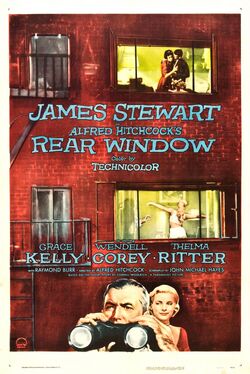 Rear Window is a 1954 American mystery thriller film directed by Alfred Hitchcock and written by John Michael Hayes based on Cornell Woolrich's 1942 short story "It Had to Be Murder". The film stars James Stewart, Grace Kelly, Wendell Corey, Thelma Ritter and Raymond Burr.

Professional photographer L.B. "Jeff" Jeffries (James Stewart) breaks his leg while getting an action shot at an auto race. Confined to his New York apartment, he spends his time looking out of the rear window observing the neighbors. He begins to suspect that a man (Raymond Burr) across the courtyard may have murdered his wife. Jeff enlists the help of his high society fashion-consultant girlfriend Lisa Freemont (Grace Kelly) and his visiting nurse Stella (Thelma Ritter) to investigate.

The film received overwhelmingly positive reviews from critics and is considered one of Hitchcock's finest films. On the website Rotten Tomatoes, the film has been universally praised, garnering a 100% certified fresh rating, based on 61 reviews, with the consensus stating that "Hitchcock exerted full potential of suspense in this masterpiece."

Retrieved from "https://movies.fandom.com/wiki/Rear_Window_(1954)?oldid=121830"
Community content is available under CC-BY-SA unless otherwise noted.