Start a Wiki
watch 01:27
The Loop (Movies)
Do you like this video?
Recess: School's Out 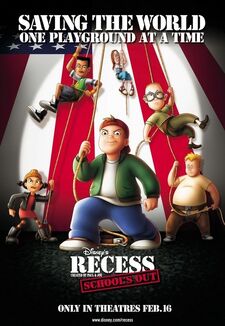 Recess: School's Out is a 2001 American animated comedy mystery film based on the Disney television series "Recess."

It was released theatrically in the United States on February 16, 2001 & was produced by Walt Disney Pictures & Walt Disney Television Animation with animation done by Sunwoo Animation & Sunwoo Digital International and distributed by Buena Vista Pictures Distribution.

The movie begins with a prologue set in a U.S Army base somewhere in the Nevada Desert. An unknown group breaks into the facility, knocking out the guards and absconding with a top-secret project. The unseen leader of the group instructs his men to move the equipment to "where it all began": Third Street Elementary School.

After pulling off one last big prank at Third Street Elementary School which involves stealing the ice cream that Miss Finster had been hoarding and distributing it to the kids, T.J. Detweiler and his friends are excited about being done with the rest of the school year and starting summer vacation.

But T.J.'s happiness is short-lived as he discovers that all five of his best friends (as well as most of their fellow schoolmates) are going away for most of the summer at various summer camps around the state to plan for their futures. T.J. immediately becomes bored and lonely without his friends to hang out with, and eventually, he reluctantly agrees to hang out with the school snitch Randall.

On his way, T.J. notices something going on at the school where he sneaks inside and finds a group of scientists using a tractor beam to levitate an office safe. Panicked, he tries to tell his parents and the police, but they don't believe. When he summons Principal Prickly to investigate, the principal is electrocuted and de-materialized while attempting to unlock and open the door. Having no more leads, T.J. rounds up his friends from their camps to assist him in finding out what is happening in the school.

T.J. and his friends steal a box of documents, but find them all filled with weather maps. T.J's friends accuse him of making up an idea only to bring them back. T.J. tells them he really did see Prickly disappear, but the gang spots what seems like Principal Prickly alive and well getting into a car and driving off. The five are about to return to their camps when they see an enormous tractor beam emerge from the roof and shoot a green laser, realizing that T.J. was telling the truth.

The next day, the gang finds Prickly's golf pants in a dumpster and also sees the bald man he saw guarding the school pull off a mask of Principal Prickly's face, showing that he was pretending to be Prickly.

However, the gang are discovered by the henchmen (as well as a cadre of ninjas) and are forced to flee, an act witnessed by a shocked Randall and Finster. T.J., on the other hand, is captured himself and thrown into the storage room, where he discovers the real Prickly tied up and gagged. The men's boss turned out to be a former friend of Principal Prickly by the name of Dr. Phillum Benedict, who enters the room to interrogate Prickly and T.J. of their interference.

After Benedict leaves, Prickly reveals to T.J. that he and Benedict went into teacher training together. Prickly then explains his story: back in the spring of 1968, Benedict became the principal of Third Street School, the youngest principal in the history of the state at the time. He was also Prickley's best friend and Miss Finster's boyfriend. During a private conversation with Prickly, Benedict told him that he had decided to abolish recess as a way to raise up test scores. Prickly was horrified and the students' parents were so angry, they held a protest demanding that recess return, but Benedict could not be swayed.

Prickly informed the Superintendent, who immediately overturned Benedict's motion, much to the parents' joy. When Benedict still refused to back down, the superintendent demoted Benedict and promoted Prickly in his place. Benedict angrily accused Prickly of stealing his job, which along with his hatred of recess, caused Finster to break up with him.

An infuriated Benedict promptly ended his friendship with Prickly, quit teaching, and swore revenge. Later on, Benedict went into politics and became the Secretary of Education, only to be fired by the President when he tried to abolish recess nationwide.

Using the air ducts, T.J. and Prickly head to Prickly's office, where T.J. finds his confiscated walkie-talkie and tells his friends Benedict wants to destroy summer vacation after seeing graffiti on the wall. However, T.J. and Prickly are caught by the bald guy again before T.J. could explain further.

T.J.'s friends then try to get the police into the case, but just like T.J., they end up being laughed at. Even Finster tried to voice her compliant over what's happening in the school, only for the police to laugh at her, much to her anger.

T.J.'s friends go through the box of documents again. Spinelli finds a date book that says lunar perigee (which happens to be 12:22 the next afternoon) on it; Gretchen deduces that Benedict is trying to move the moon's orbit with the tractor beam (the very same technology stolen earlier from the army base) when it's closest to the Earth.

Benedict confirms this while speaking To T.J. and Prickly, revealing his plan is to move the moon into a position that will change the climate during the summer months, which as a result will create a new ice age in order to force kids to stay inside to study.

T.J.'s friends get T.J.'s sister Becky to drive to the camps again, where they pick up all the children. Using his own expertise from military camp, Gus draws up the plans to liberate the school. T.J. and Prickly are locked in a cage as T.J. panics. Prickly tells T.J. off by reminding him that he also was a child once and that the memories of his summer vacations are the only thing he has left of his childhood. Prickly and T.J. proceed to escape the cage, as Prickly was able to swipe off the keys from Benedict's office.

After reuniting with T.J. and Prickly, the kids storm the auditorium, only for another set of guards to restrain them as Benedict orders his scientists to activate the beam. However, Finster arrives to the rescue, bringing the rest of the teachers as backup to help the students, resulting a battle between Benedict's men and the students & teachers.

During the fight, Prickly punches Benedict in the face to prevent him from triggering the beam, but as Benedict slumps, he triggers the beam and Prickly cannot deactivate it. Vince manages to throw a baseball into the machine and destroys the device in the process, much to everyone's delight and to Benedict's horror and despair.

Following the aftermath of the battle in the school, the students and teachers of the school are declared heroes while Benedict and his men are arrested by the authorities for theft of government property, breaking & entering and attempted terrorism.

Having defeated Benedict for good, T.J.'s friends inform him they intend to spend the rest of their summer with him, citing that they do not have much time left to be just kids. T.J. then rushes into Prickly's office to thank him, only to be thanked by him himself for reminding him why he went into teaching in the first place: to help kids.

The film ends with T.J. and his friends rushing off to the lake while Prickly looks on, smiling while putting on his peace symbol medallion for the first time in decades.

James Woods was originally cast in the role of Benedict, but was replaced with Burt Reynolds because the producers thought his' performance was too over-the-top and sinister.

To accommodate with the film's '60s era, the production crew decided to add music from the 1960s hippie period. This includes songs like "Dancing in the Street", "One", "Nobody But Me", "Aquarius/Let the Sunshine In", etc.

Review aggregator Rotten Tomatoes reports that 61% of 69 surveyed critics gave "Recess: School's Out" a positive review; the average rating is 5.8/10. The site's consensus reads: "Though basically a TV cartoon stretched out to movie-length, Recess has enough successful jokes and smart writing to make it a worthwhile view."

Wesley Morris from the San Francisco Chronicle said that the film "is thin on laughs, but it's redolent of something funnier and altogether more unusual in the kid-flick climate: unmitigated sincerity."

Stephen Holden from the New York Times said the film is "perfectly fine in its standardized idea of child anarchy; only in cartoons do children still own marbles."

Roger Ebert gave the film Thumbs Down, but did state that "...although it lacks the zany exuberance of the recent "Rugrats in Paris," it's fast-footed and fun."

Retrieved from "https://movies.fandom.com/wiki/Recess:_School%27s_Out?oldid=205117"
Community content is available under CC-BY-SA unless otherwise noted.