watch 02:03
Wiki Targeted (Entertainment)
Do you like this video?
Play Sound
Red Dawn 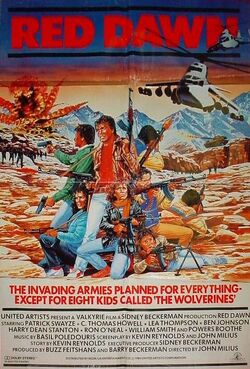 Red Dawn is a 1984 American war film directed by John Milius and co-written by Milius and Kevin Reynolds. It stars Patrick Swayze, C. Thomas Howell, Lea Thompson, Charlie Sheen and Jennifer Grey. It was the first film in cinema history to be released with the MPAA rating of PG-13.

A Red Dawn 2 (based off of the original) was going to be made and released in 1993, but got cancelled because the Cold War ended.

The film is set in an alternate 1980s in which the United States and Western Europe is invaded by the Soviet Union and its Cuban, Nicaraguan, and Warsaw Pact Allies. However, the onset of World War III is in the background and not fully elaborated. The story follows a group of American high school students who resist the occupation with guerrilla warfare, calling themselves Wolverines, after their high school mascot.

The first motion picture released with an MPAA PG-13 rating. (The Flamingo Kid, the first film to *get* a PG-13 rating, sat on the shelves for 5 months before release.)

The illustration of Genghis Khan in the high school classroom at the beginning of the film is a caricature of director John Milius.

The original trailer, on the laserdisc release, includes a scene with a tank rolling up to a McDonald's where enemy soldiers are eating. The scene does not appear in the final cut, and was likely removed due to a mass murder at a McDonald's in San Ysidro, CA, weeks before the film opened.

The film's replica Soviet T-72 tank was so precise that when it was transported to the studio, two CIA agents followed and wanted to know where it had come from.

The plot, a Soviet/Cuban invasion from Mexico, was based on CIA and War College studies of US weaknesses at the time.

While filming the invasion scene at the high school, five parachutists dressed as Soviet soldiers were blown up to a mile off course.

In the movie, the Wolverines bomb the invaders' regional headquarters. On August 3, 2006, heavy thunderstorms destroyed the 107-year-old Center Block Building in Las Vegas, NM, where the scene was filmed.

An old Safeway grocery store in Las Vegas, NM, was converted to a sound stage and used for several scenes.

The submachine gun Strelnikov uses near the end of the film is a Finnish-made Jati-matic GG-95 PDW. About 400 were manufactured in the mid-1980s.

"Red Dawn" was the given code name of the military operation in Iraq that captured Saddam Hussein on December 13, 2003. John Milius felt honored by that.

The original movie tagline said, "In our time, no foreign army has ever occupied American soil." Some historians believe that is historically inaccurate. British troops occupied American territory during the War of 1812. They occupied an area outside of New Orleans, and occupied and burned large parts of Washington, DC, including the White House, in 1814. Japanese forces occupied several islands off the coast of Alaska during World War II. However, the statement "In our time" (within a viewer's lifetime) is technically correct. No viewer was alive during the War of 1812, and Alaska was still a territory when Japan invaded; it become a state in 1959.

The original title of the script was "Ten Soldiers".

Though the story takes place in Colorado, it was mostly filmed in Las Vegas, NM. In the short montage of destroyed Soviet vehicles that have been tagged with Wolverines graffiti, a highway sign in the background (with a large fish on it) advertises Storrie Lake, a New Mexico state park about 5 miles north of Las Vegas, NM.

When Erica finds the Lt. Col., she tries to ascertain his nationality by asking him to identify the capital of Texas. When he says Austin, Erica incorrectly says Houston. The incorrect answer is an in-joke; Powers Boothe is a Texas native, and Patrick Swayze was from Houston.

The sprocket wheel on all modern tanks is in the rear. The replica Soviet equipment was mostly American M-48 tanks. Driving the tanks backward and adding a fiberglass turret gave the replicas a more authentic look.

The Russian leader of the invaders is Strelnikov. In the 1965 movie Doctor Zhivago, schoolteacher Pasha Antipov (Tom Courtenay) assumes the name Strelnikov when he becomes a leader of the Red Partisans during the Russian Revolution.

The name of guerrilla fighters resistance group that the teenagers called themselves was the "Wolverines".

Some movie posters for the film featured a long text preamble that read: "8:44 A.M. A full scale military invasion by foreign troops begins. Total surprise. Almost total success. A gang of high school kids become the last line of defense".  Share this The Russian text seen in red lettering above the movie's title in the film and on movie posters is Russian language for "Red Dawn".

'Soldier of Fortune' magazine said that the film's T-72 tank was such a good replica that "while it was being carted around Los Angeles, two CIA officers followed it to the studio and wanted to know where it had come from".

Second of two films that actor Patrick Swayze made with producer John Milius. The other film, released the previous year, was Uncommon Valor. Both pictures were war movies.

Around three years after this film was first made and released, Jennifer Grey and Patrick Swayze would later headline the movie Dirty Dancing

The film's remake Red Dawn did not involve an attack on American soil by Russians but instead featured an invasions there by North Koreans. The remake was made and released around twenty-eight years after this movie. Originally, the remake had China as the invaders before it was changed. This had a more direct connection with this film, as China and the former Soviet Union's flags are both predominantly red with a small amount of yellow. The two communist countries have both had a connection with the word "red" which forms part of both movies' "Red Dawn" title i.e. as with 'Red China' and 'Red Russia'. The color red is frequently associated with communism, even used as a movie title for a movie about the Russian Revolution, it being Reds.

Spoilers  The trivia items below may give away important plot points. The upbeat epilogue showing Partisan Rock, with the voice-over explaining that America eventually won the war, was added at the studio's insistence.

The film's closing epilogue, which is the same as the inscription on the "Partisan Rock" plaque, states: "...In the early days of World War III, guerrillas - mostly children - placed the names of their lost upon this rock. They fought here alone and gave up their lives, so that this nation shall not perish from the earth".

Retrieved from "https://movies.fandom.com/wiki/Red_Dawn_(1984)?oldid=198199"
Community content is available under CC-BY-SA unless otherwise noted.