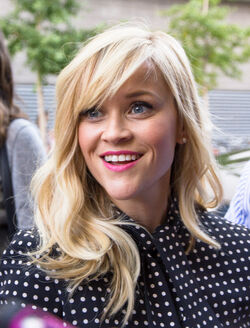 Laura Jeanne Reese Witherspoon (born March 22, 1976) is an American actress and producer. Witherspoon began her career as a child actress, making her professional screen debut with a nominated for a Young Artist Award nomination for her role in 1991's The Man in the Moon.

Born Laura Jeanne Reese Witherspoon, her father, Dr. John Draper Witherspoon, was a student at Tulane University medical school at the time of her birth. Her father served as a lieutenant colonel in the United States Army Reserve, and was later in private practice as an otolaryngologist until 2012. Her mother, Mary Elizabeth "Betty" (née Reese) of Harriman, Tennessee, earned a BS and master's degrees in Nursing, and a doctorate of education. She worked as a professor of nursing specializing in child care and mental health at Vanderbilt University. Her mother began nursing babies back to health in the neonatal intensive care unit of Vanderbilt University Hospital in 1988 until she retired. Her parents are still legally married, although they have been separated since 1996.

As an 'Army Brat', Reese lived int Wiesbaden, Germany for four years as a child as her father worked for the U.S. military. After her return to the U.S., she spent her childhood in Nashville, Tennessee. In school, Reese received high grades, loved reading, and considered herself "a big dork who read loads of books." On her love of books, she once said: "I get crazy in a bookstore. It makes my heart beat hard because I want to buy everything." At seven years old, she was selected as a model for a florist's TV commercials, which prompted her to take acting lessons for the first time. When she was eleven, she entered the "Ten-State Talent Fair" and took first place.

Witherspoon attended middle school at Harding Academy and was a cheerleader at the all-girls' Harpeth Hall School in Nashville, from which she graduated. She attended Stanford University as an English literature major, however she left college after only one year in order to pursue a career in acting. She is proud of her "definitive Southern upbringing", and has said that it gave her "a sense of family and tradition" and taught her about "being conscientious about people's feelings, being polite, being responsible and never taking for granted what you have in your life." Reese was described as a "multi-achiever" by her parents, who gave her the nickname "Little Type A". On discussing her early achievements, she told Interview magazine, "I just don't see any of it as that remarkable. Maybe that's the attitude I choose to have to keep me sane and keep my feet on the ground. I grew up in an environment where women accomplished a lot. And if they weren't able to, it was because they were limited by society."