watch 00:59
The Loop (Movies)
Do you like this video?
Resident Evil 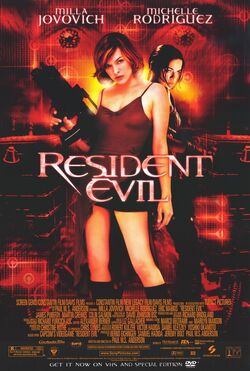 Underneath Raccoon City exists a genetic research facility called the Hive, owned by the Umbrella Corporation. A thief steals the genetically engineered T-virus and contaminates the Hive with it. In response, the facility's artificial intelligence, the Red Queen, seals the Hive and kills everyone inside.

Alice awakens in the bathroom of a deserted mansion with temporary amnesia. She dresses, checks the mansion, and is tackled by an unknown person as a group of commandos led by James Shade breaks in. Alice’s attacker is cuffed and then released when he claims to be Matt Addison, who just transferred as a cop in Raccoon P.D. Alice and Matt are ordered to go down to the Hive with the group, where they find another amnesiac, Spence, hidden in their train. The commandos explain that everyone in the group except Matt is an employee of the Umbrella Corporation, and Alice and her partner Spence were assigned to guard the Hive’s secret entrance under the mansion.

At the Red Queen's chamber, a laser defense system kills Shade and three more commandos. Despite the Red Queen's urgent pleas for the group to leave, Kaplan disables it, causing the power to fail and all of the doors in the Hive to open. This releases the zombified staff and containment units containing Lickers, creatures created through experimentation with the T-virus. When everyone regroups, they are ambushed by a horde of zombies and a gunfight ensues. J.D. perishes as the group is overwhelmed. A bitten Rain retreats with Kaplan and Spence; Matt becomes separated from Alice, who starts regaining her memories.

Matt looks for information about his sister, Lisa, and finds her zombified. Alice saves him, and Matt explains he and Lisa were environmental activists, and Lisa infiltrated Umbrella to smuggle out the evidence of illegal experiments. Alice remembers she was Lisa's contact in the Hive but does not tell Matt. The survivors reunite at the Red Queen's chamber, and the commandos explain they have one hour before the Hive traps them inside automatically. Alice and Kaplan activate the Red Queen to find an exit. To force her cooperation, they rig a remote shutdown. As they escape through maintenance tunnels, zombies ambush them, and a reanimated J.D. bites Rain before she then shoots him dead. They all reach safety except Kaplan, who is bitten and separated from the group.

Alice remembers that an anti-virus is in the lab, but they find it missing. Spence remembers he stole and released the T-virus, and hid it and anti-virus on the train. He turns against the others but is bitten by a zombie, which he kills before trapping the survivors in the lab. Spence retrieves the anti-virus, but is then killed by a Licker. The Red Queen offers to spare Alice and Matt if they kill Rain, whose health is fading and who has been infected too long for the anti-virus to work reliably. As the Licker attempts to reach them, a power outage occurs. The lab door opens to reveal that a still-alive Kaplan shut down the Red Queen to open the door. The group heads to the train, where Alice retrieves the T-virus and kills a reanimated Spence before escaping with the others.

On the train, they inject Rain and Kaplan with the anti-virus. However, the Licker is hiding on the train and attacks them, clawing Matt and killing Kaplan. Alice subdues the Licker before Matt is attacked by a zombified Rain. He shoots Rain dead, and her head hits a button, opening a door and dropping the Licker under the train, which kills it. At the mansion, Matt's wound begins mutating. Before Alice can give him the anti-virus, the mansion doors burst open and a group of Umbrella scientists seizes them. They subdue Alice and take Matt away, revealing he is to be put into the Nemesis Program, and that the Hive is to be re-opened for investigation into the incident.

Some time later, Alice awakens at the Raccoon City Hospital strapped to an examination table. After escaping, she goes outside to find Raccoon City deserted and in ruins. The film ends with Alice grabbing a shotgun from an abandoned police car walking through the streets

Retrieved from "https://movies.fandom.com/wiki/Resident_Evil?oldid=190373"
Community content is available under CC-BY-SA unless otherwise noted.