watch 00:59
The Loop (Movies)
Do you like this video?
Resident Evil: Damnation 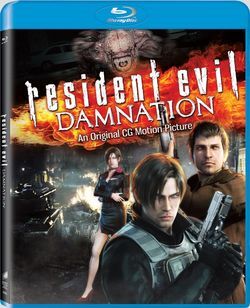 Resident Evil: Damnation is a 2012 Japanese feature-length computer-animated horror 3D film by Capcom and Sony Pictures Entertainment Japan directed by Makoto Kamiya and produced by Hiroyuki Kobayashi. It is a sequel to Resident Evil: Degeneration and release on October 25 2012 in Japan, primiering in Shinjuku, Tokyo.

Leon S. Kennedy sneaks into the Eastern Slav Republic to confirm rumors that biological weapons (also known as B.O.W.'s) are being used in the country's civil war, which the U.S. and Russia are preparing to intervene in. After his arrival, Ingrid Hannigan, Leon's mission support, informs him that the government has ordered an immediate retreat of all U.S. forces. Determined to stop the biological warfare, Leon ignores the order. Leon comes across his contact, "Scarecrow", who has been attacked and is near death. A Licker attacks the pair and finishes off Scarecrow as Leon is knocked out by an explosion, a shadowy figure orders the Licker to not kill Leon which it mysteriously obeys immediately. Leon awakens, tied to a chair by rebel fighters JD, Alexander Kozachenko (Buddy) and an eldery man named Ivan Judanovich (Ataman).

Meanwhile, President Svetlana Belikova meets Ada Wong, who states herself as a BSAA agent. Ada explains a master-slave relationship between a B.O.W. and a human infected with the virus' dominant strain is possible. Elsewhile, soldiers burst into the rebel hideout; Leon tries warning them of Ivan's infection, but Buddy begins a shootout. Ivan tells Buddy to kill him, fearing his poor health is a burden; Buddy reluctantly complies. Elsewhere, Leon meets JD, only for Plaga hosts to attack them; Leon suspects the rebels possessed the Plaga parasites, which have escaped and infected them. JD helps Leon escape, urging him to stop Buddy; a government bombing of a school killed Buddy's fiancee and her students, causing his hatred.

Leon runs into Ada, who he thinks she's responsible due to her sample-retrieval mission during the Los Illuminados incident. Ada denies it and confesses retrieving a sample is her primary objective in the Eastern Slav Republic. Ada leaves, warning the city will soon be bombed. Leon returns to the church to find Ganados attacked it, finding JD as the only survivor. Buddy arrives, with JD revealing he was infected during the Ganados' attack; after JD and Buddy share some words, Leon shoots and kills him. Leon asks Buddy to give up the parasites, however Buddy refuses and escapes when military jets bomb the church, bringing the ceiling down.

Svetlana exposes Ada as a fraud, engaging her in hand-to-hand combat; evenly matched, Ada attempts escape. However, the room is sealed; it doubles as an elevator. Leon arrives shortly later, descending the empty shaft. Ada finds herself tied up, but frees herself with a knife hidden in her high heels. She and Leon meet up at the main hive control. Svetlana and her troops surround them; Ada releases a smoke bomb and escapes while Leon gets into a shootout with the soldiers, killing several. Buddy arrives, sending Lickers to attack the troops. Svetlana activates her own B.O.W.'s before escaping which are two Tyrants to wipe out her opposition including the Lickers. Leon and Buddy team up and barely make it out of the palace basement, smashing the Tyrants with the elevator. Outside, a third Tyrant appears; Leon and Buddy decapitate it with tank fire. With the Tyrant overturned, Leon and Buddy are forced into a confrontation with the first two Tyrants, which have finally reached the surface. Leon grabs Buddy to flee while the Tyrants give chase. With no ammo left, Leon brandishes his combat knife to make a last stand, when USAF A-10 attack planes appear and take out both Tyrants. Just as Svetlana prepares for her press conferance, she is informed by her aide that they are under attack by U.S. and Russian forces. Their bombardment and subsquent occupation eventually forces her to resign.

As Leon and Buddy watch, Buddy believes there is nothing left to live for and asks Leon to kill him before the Plaga takes control. Leon doesn't comply, telling him to carry on living even without the use of his limbs for the ones who have died and to serve as their living memory. Leon then shoots Buddy's spine, severing the Plaga's control over him and confining Buddy to a wheelchair and Buddy resumes being a teacher. Three days later, Leon speaks to Hannigan while watching the news about the U.S. and Russia intervening in the civil war on TV. Elsewhere, Ada speaks to her employer about a Plaga sample she retrieved, but haggles and says that she has not quite decide whether or not to give it.

Resident Evil Damnation Movie Trailer
Add a photo to this gallery
Retrieved from "https://movies.fandom.com/wiki/Resident_Evil:_Damnation?oldid=168333"
Community content is available under CC-BY-SA unless otherwise noted.