Start a Wiki
watch 01:48
The Loop (Movies)
Do you like this video?
Resurrection 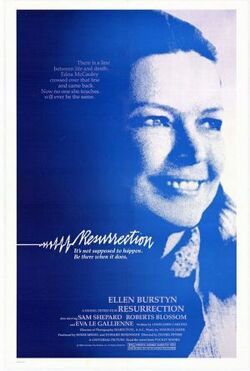 Ellen Burstyn plays Edna McCauley, the wife of a man (Jeffrey DeMunn) who is killed in an auto crash. Edna herself survives, but not before enduring an "out-of body" experience. Crippled in the accident, Edna heads to her hometown in Kansas to recuperate. There she discovers that she has the power to heal people, presumably a byproduct of her brief trip into the beyond. She accepts her gift, but resists the notion that she has been blessed with divine powers. On the other hand, her young lover (Sam Shepard) believes that she is the embodiment of Jesus Christ. It is his method of proving his hypothesis that brings the film to its startling conclusion. Both Ellen Burstyn and Eva Le Gallienne (as Burstyn's grandmother) were nominated for Academy Awards.

Retrieved from "https://movies.fandom.com/wiki/Resurrection?oldid=60158"
Community content is available under CC-BY-SA unless otherwise noted.