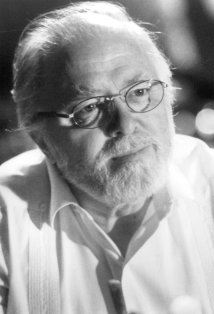 His feature film directorial debut was the all-star screen version of the hit musical Oh! What a Lovely War (1969), and his acting appearances became more sporadic - the most notable being his portrayal of serial killer John Christie in 10 Rillington Place (1971). He later directed two epic period films: Young Winston (1972), based on the early life of 'Winston Churchill', and A Bridge Too Farr (1977), an all-star account of Operation Market Garden in World War II. He won the 1982 Academy Award for Directing for his historical epic "Gandhi", a project he had been attempting to get made for many years. As the film's producer, he also won the Academy Award for Best Picture. His most recent films as director and producer include Chaplin (1992) starring Robert Downey Jr. as Charles Chaplin and Shadowlands (1993), based on the relationship between C.S. Lewis and Joy Gresham. Both films starred Anthony Hopkins, who also appeared in three other films for Attenborough: "Young Winston", "A Bridge Too Far" and the thriller Magic (1978).

Attenborough also directed the screen version of the hit Broadway musical : A Chorus Line (1985) and the apartheid drama Cry Freedom (1987), based on the experiences of Donald Woods. He was nominated for a Golden Globe Award for Best Director for both films. His most recent film as director was another biographical film, Grey Owl (1999), starring Pierce Brosnan.

Retrieved from "https://movies.fandom.com/wiki/Richard_Attenborough?oldid=30533"
Community content is available under CC-BY-SA unless otherwise noted.