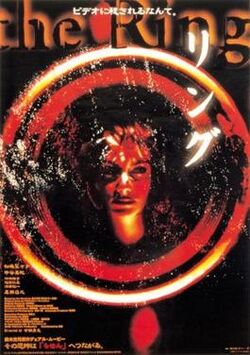 Ring (リング, Ringu) is a 1998 Japanese horror film directed by Hideo Nakata, based on the 1991 novel by Kôji Suzuki. The film stars Nanako Matsushima, Hiroyuki Sanada and Rikiya Ōtaka, and follows a reporter who is racing to investigate the mystery behind a cursed videotape that kills the viewer seven days after watching it.

Production took approximately nine months. Ring and its sequel Rasen were released in Japan at the same time. After its release, Ring was a huge box office success in Japan and was acclaimed by critics. It inspired numerous follow-ups within the Ring franchise and triggered a trend of Western remakes, starting with the 2002 American film The Ring.

Two high schoolers, Masami and Tomoko, talk about a videotape that was allegedly recorded in Izu and also bears a curse that kills the viewer in one week. Tomoko reveals that a week ago, she and three of her friends watched a strange tape and received a call after watching. The two are interrupted by a phone call, but it turns out to only be Tomoko's mother. However, as soon as Masami returns upstairs, Tomoko witnesses her TV turn on by itself. She later hears startling noises and turns around, only to be killed by an unseen force.

At Tomoko's funeral, her maternal aunt Reiko Asakawa, a reporter investigating the popularity of the cursed video, discovers that three of her friends also died on the same night, with their faces twisted in fear. While investigating Tomoko's room, she notices a photo receipt and goes to pick up the photo copies. Looking through Tomoko's photos, Reiko finds that the four teenagers stayed in a rental cabin in Izu, and that one of the photos shows their faces are blurred. Eventually, Reiko heads off to the cabin, but not before Yoichi claims Tomoko saw the cursed tape.

Reiko arrives at the cabin in Izu, and eventually attempts to get information from the clerk. In the process, Reiko notices an unlabeled tape on the rental shelf, and picks up the tape to see for herself. The tape shows a series of seemingly unrelated and disturbing images. As the tape ends, she sees a mysterious reflection in the television and receives a phone call. However, there are only screeching sounds from the tape. Fearing that her days are now numbered, Reiko quickly leaves the cabin with the tape.

Her ex-husband, Ryūji Takayama is soon enlisted to investigate the tape's origin. The next morning, Ryuji discovers that Reiko's face is blurred in a photo, much like those of the teenagers were. Despite Reiko's objections, Ryūji watches the tape and tells her to make him a copy, which they start reviewing the next day, aside from a brief interruption from Ryuji's student Mai Tokano. Studying further, the two find a hidden message embedded within the tape saying "frolic in brine, goblins be thine". The next morning, Ryuji has found that the message is in the form of a dialect from Izu Ōshima Island. Two nights later, while the two are staying with Reiko's father, Reiko catches Yoichi watching the videotape, claiming the ghost of Tomoko asked him to do so.

Reiko and Ryūji sail for Ōshima and discover the history of the great psychic Shizuko Yamamura. They stay in an inn run by Takashi, Shizuko's brother. Ryūji discovers that Takashi exposed Shizuko to the media, hoping to make money from the situation. The media attention attracted Dr. Heihachiro Ikuma, who, besides researching ESP, had an affair with Shizuko. Dr. Ikuma held a demonstration, where Shizuko successfully displayed her psychic abilities. However, one journalist spitefully denounced her as a fraud, inciting his other colleagues to do the same. In retaliation, Shizuko's daughter, Sadako, psychokinetically killed the journalist, with his face twisted like Tomoko's and her friends'. Shortly after, a series of slanderous reports drove Shizuko to commit suicide. Meanwhile, Dr. Ikuma was fired and took Sadako to an unknown location.

Reiko and Ryūji deduce that Sadako psionically created the cursed videotape to express her fury against the world. After an epiphany, the two go back to Izu and uncover a well underneath the cabin. Through a vision, they discover that Dr. Ikuma murdered Sadako and threw her body into the well. They try to find Sadako's body in an attempt to appease her spirit. Minutes before her seven days are up, Reiko finds Sadako's corpse, and they return home, relieved that the curse is seemingly broken.

The next day, however, when Ryūji is at home, his TV switches on by itself and shows the image of a well. The vengeful ghost of Sadako crawls out of the well, out of Ryūji's TV set and frightens him into a state of shock, killing him. Before dying, Reiko had tried to call; so she hears his last minutes over the phone and finds out only she is free from the curse. Desperate to save Yoichi, Reiko realizes that copying the tape and showing it to someone else was what saved her. So with a VCR, Reiko drives to her father's house, where she plans to let her son copy the tape and show it to her father.