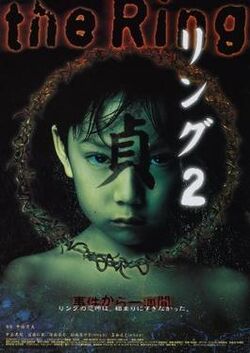 Ring was originally a novel written by Koji Suzuki; its sequel, Rasen (a.k.a. Spiral), was also adapted into a film as the sequel to Ring. However, due to the poor response to Rasen, Ring 2 was made as a new sequel to Ring, not based on Suzuki's works, and thus ultimately ignores the story of Rasen.

Ring 2 takes place a couple of weeks after the first film, directly continuing the story and features most of the cast from Ring reprising their roles.

After the body of Sadako Yamamura is retrieved from a well, her uncle Takashi is summoned by police to identify her. Detective Omuta explains to Takashi that forensics concluded Sadako may have survived in the well for thirty years. Forensics experts reconstruct her body, giving it to Takashi, who gives his niece a burial at sea, hoping to be free from the guilt he has carried since her mother Shizuko committed suicide because of his actions. The police search for Reiko Asakawa following the sudden death of her ex-husband Ryuji Takayama and her father Koichi a week later. Mai Takano, Ryuji's university assistant, investigates his death, visiting Reiko's news office where her colleague Okazaki joins Mai in her search for answers. They find a burnt out videotape in Reiko's apartment, Mai sensing Reiko's father died the same way as Ryuji.

Investigating the urban legend of the cursed videotape, Okazaki meets a high school student Kanae Sawaguchi, who gives him a copy of the tape but admits she watched it herself. She begs Okazaki to watch the tape before the week is up, but he chickens out and hides his copy in his desk drawer at work.

Mai and Okazaki go to a mental hospital to speak to Masami Kurahashi, a friend of Reiko's niece Tomoko, but learn she is both mute and has a phobia of televisions, having witnessed Tomoko's death. They meet Doctor Oisho Kawajiri, Masami's doctor, and a paranormal researcher, who is trying to expel the psychic energy within Masami through experimentation. Mai steps out for some air, encountering Masami, whose presence causes Sadako to materialise on a television and terrify the patients.

Mai finds Reiko's son Yoichi alone in a shopping mall before his mother appears. Mai learns Yoichi has been mute since his father and grandfather's deaths and his psychic abilities intensified, and Reiko asks if Kawajiri can help. Returning to the hospital, Mai, Okazaki, and Detective Omuta observe Kawajiri's experiment to exorcise the psychic energy from Masami by projecting her mental imagery onto a blank tape. However, it causes the cursed videotape's imagery to appear, killing Masami, and Mai destroys the recording. Upon learning Kanae has died from the curse, Mai surrenders Reiko and Yoichi to the authorities. Realising the two are to be separated, Mai telepathically warns Yoichi, who escapes with Reiko, who is consequentially hit by a truck. Okazaki attempts to delete his interview with Kanae, only for her ghost to materialise and haunt him.

Mai and Yoichi travel to Oshima Island and stay in the Yamamura Inn. Yoichi has a nightmare, causing Shizuko's and a young Sadako's ghosts to appear before Mai wards them away. Dr. Kawajiri arrives in the night, offering to exorcise Yoichi as he tried with Masami, with Mai volunteering to act as a conduit to expel Sadako's hatred into a swimming pool, water being able to neutralise the energy. However, the attempt turns frightening, Sadako's coffin appearing in the pool. Takashi drowns himself to stop Sadako, while Kawajiri goes insane and commits suicide by diving into the pool carrying electrical equipment.

Mai and Yoichi fall into the water, appearing inside the well. Ryuji's ghost appears, absorbing Sadako's rage from his son, and summons a rope that will guide Mai to safety as long as she doesn't look down. Mai ends up doing so, causing Sadako's ghost to appear, who scales the well only to cryptically ask, “Why is it only you were saved?”, before falling back into the well. Mai and Yoichi emerge in the pool, free of their fear. While Okazaki is institutionalised, a nurse takes a picture of him. As she leaves the room she notices something in the photo, seemingly shocked; behind Okazaki is Kanae's laughing spirit looking for revenge.

Retrieved from "https://movies.fandom.com/wiki/Ring_2?oldid=201292"
Community content is available under CC-BY-SA unless otherwise noted.