Start a Wiki
watch 01:38
The Loop (Movies)
Do you like this video?
Rise of the Planet of the Apes 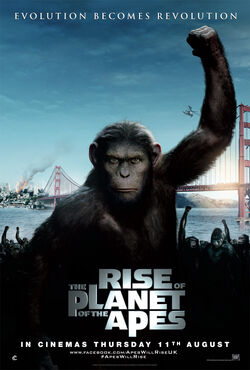 Rise of the Planet of the Apes is a 2011 American science fiction film directed by Rupert Wyatt and starring James Franco, Freida Pinto, John Lithgow, Brian Cox, Tom Felton, David Oyelowo, and Andy Serkis. Written by Rick Jaffa and Amanda Silver, it is 20th Century Fox's reboot of the Planet of the Apes series, intended to act as an origin story for a new series of films. Its premise is similar to the fourth film in the original series, Conquest of the Planet of the Apes (1972), but it is not a direct remake of that film. In the film, a substance designed to help the brain repair itself gives advanced intelligence to a chimpanzee named Caesar, who leads an ape uprising.

Will Rodman, a San Francisco scientist, has been working on 'ALZ-112', a genetically engineered retrovirus that may be a cure for Alzheimer's Disease, for five years. ALZ-112 not only repairs brain cells, but genetically enhances them, giving chimpanzees a human level of intelligence. One of his test subjects is 'Bright Eyes', a female chimpanzee recently captured in Africa. Much to everyone's shock, Bright Eyes goes on a rampage two months into her trial, before security is forced to kill her in front of board members, thus destroying any chance of developing ALZ-112 further. It is then discovered, however, that Bright Eyes' aggression was not due to the drug, but due to her maternal instinct to protect her baby, to whom she had secretly given birth a day or two earlier. Will's money and power hungry boss, Steven Jacobs, orders all twelve test chimpanzees put down after Bright Eyes' rampage, but Robert Franklin, the chimp handler responsible for carrying out this order, cannot bring himself to kill the chimpanzee baby, and instead gives it to Will, who names him Caesar and raises him in his house.

Caesar inherited his mother's high intelligence due to the drug, thus learning at a fast rate. Caesar is able to learn sign language with the help of Will and a veterinarian named Caroline Aranha. After three years, Will also gives a sample of ALZ-112 to his father, Charles, who is suffering from Alzheimer's Disease. At first his father improves but five years later, his body's immune system develops antibodies that fight off the virus and his dementia returns. In his state of dementia, Charles gets into his neighbor's car and turns it on, the key carelessly left in the ignition. He presses the gas and hits the cars in front of him and behind him, getting the attention of the neighbor, Hunsiker, who threatens and pushes down Charles. Caesar is also alerted of the situation and jumps out of a window, attacking and biting the neighbor's finger off in Charles's defense. After the incident, Caesar is forced to leave Will's house and is held in the San Bruno Primate Shelter run by John Landon, where the apes are held in cages with the exception of intermissions where they are released into a jungle-themed play area. The apes inside the facility are treated cruelly by Landon's son, Dodge, who works as a guard there.

At the primate facility, Caesar starts out being treated poorly by both the staff and by most of his ape companions. In the exercise area, he is beaten by the dominant chimp, Rocket. Caesar also forms a friendship with Maurice, a former circus orangutan who has learned sign language as well. Later, Dodge brings his friends into the facility who tease the apes. Without caution his male friend moves too close to Caesar's cage and is grabbed by Caesar, having his pocket knife unknowingly stolen. Caesar ties the pocket knife to a stick and uses it to unlock the door and free himself. He also frees Buck, a large and aggressive male gorilla, and gains his respect. Caesar, with Buck at his side, lures Rocket into the exercise area where he hits Rocket over the head with a metal gasoline canister (one of the toys given to the apes) but does no more harm, establishing his dominance over the apes in the facility and gaining the respect and companionship of Rocket.

Meanwhile, Will creates a more powerful virus called ALZ-113 to further treat his father, and new tests begin on ten chimps, with more later taken from the San Bruno facility. It strengthens the intelligence of the apes but, unbeknownst to Will, it is fatal to humans. Franklin is exposed to the new virus and begins sneezing blood. Later, he is found dead in his apartment, his face covered in blood. Will discovers the deadliness of the virus and attempts to warn Jacobs, but he insists on proceeding with the tests, most notably on an ape who has a scar over his blind eye, Koba. Will quits his job at Gen-Sys Laboratories, angered at Jacobs for his decisions.

Caesar eventually escapes from the primate facility and travels to Will's house, where he steals some canisters of an air-borne strain of ALZ-113 and returns to the facility, releasing it throughout the cage area and enhancing the intelligence and mental capabilities of himself and his fellow apes. The next evening, he beats down his sadistic caretaker, Dodge, when he notices Caesar in the play area while he is not supposed to be. Caesar shows his first capability of speech by shouting "NO!" at Dodge. Caesar kills Dodge by spraying him with a hose while his electric cattle-prod is turned on, electrocuting and killing him when he attempts to attack Caesar again. The apes begin to beat the other surviving night watchman, Rodney, but Caesar stops them because he was kind to the apes, and instead locks him in a cage. The apes at the facility then escape into the city by opening the windows above the play area and climbing through them. Caesar makes his way to the Gen-Sys lab when he realizes some of the shelter apes - such as Lucky and Cornelia - have been taken there. He releases the apes there and at San Francisco Zoo, and successfully leads an escape of hundreds of apes through the streets of San Francisco.

The apes then battle a police blockade of the Golden Gate Bridge meant to stop them from crossing. Caesar launches a three pronged attack with the orangutans and some of the chimps led by Maurice attacking from the bottom supports, most of the chimps guided by Koba attacking from the high-wire supports, and the gorillas and several other chimps headed by Caesar, Buck, and Rocket leading the charge straight down the bridge. They defeat the police, however Jacobs arrives in a helicopter and Police Chief John Hamil begins gunning down a few of the apes. Buck sacrifices his life to take down the helicopter which crashes on the bridge, killing all people inside except Jacobs, who begs for help but is pushed down with the helicopter into the bay below by Koba. Most of the apes survived the battle, and make it away from the city and into the redwood forest of Muir Woods Park.

Will arrives at the forest and is attacked by Koba, however Caesar stops the angry chimp before he can do any harm to Will. Will warns Caesar that the humans are strong and he will be safe if he comes home. Caesar, now capable of basic human speech, informs him "Caesar is home" in the forest and ensures that Will will be safe from the mass army of apes. The ending scene shows the apes at the top of the redwood trees, looking over the San Francisco bay.

A mid-credit scene reveals that Hunsiker, who had been infected with the virus by the now-deceased Franklin, is a pilot. As he walks into the airport, a timetable is zoomed into a flight to New York, with a graphic showing air routes connecting to Paris and from there to other cities around the world, implying the spread of a global pandemic.

Rise of the Planet of the Apes received positive reviews from critics. On Rotten Tomatoes, The film has a score of 82% based on 267 reviews with an average score of 7.12/10.

Retrieved from "https://movies.fandom.com/wiki/Rise_of_the_Planet_of_the_Apes?oldid=217389"
Community content is available under CC-BY-SA unless otherwise noted.