Moviepedia
Register
Don't have an account?
Sign In
Advertisement
in: Actors, Articles with red links, 1965 births,
and 20 more 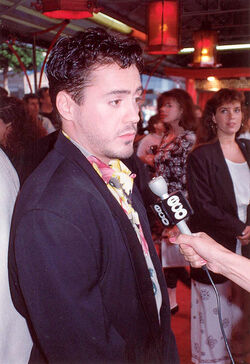 Robert John Downey, Jr. (born April 4, 1965) is an actor, comedian, singer and musicist. He portrays Iron Man in the Marvel Cinematic Universe and portrayed Charlie Chaplin in the biographic film of the same name, Kirk Lazarus in the satyrical comedy film Tropic Thunderand the great detective Sherlock Holmes in Guy Ritchie's Sherlock Holmes and its sequel, Sherlock Holmes: A Game Of Shadows.

During the 1990's and early 2000's, Downey struggled with substance abuse, including cocaine and heroin.

Speaking about Downey Jr., producer Lionel Wigram said: "He is very like Sherlock in many ways. Truly brilliant, quick-witted, logical, curious, fascinated by everything."